The Abyssinian is a tireless player. It’s constantly on the move, without making much noise or mayhem. The Abyssinian is elegant. It has an almost perfectly sculpted body. Its fur is very popular. It’s short, warm and particularly elastic to the touch.

This breed of cat has a very easy character. The Abyssinian does not like solitude, enjoys spending time with Its owner to whom It’s totally devoted. It asks for tenderness, but also for attention. Its many meows while rubbing against Its legs attest to this.

The Abyssinian is one of the oldest cat breeds. However, its origin is not very clear. Some claim that this cat comes from Asia, while the agouti-colored hair (light and dark hair) is oddly absent from this region. Another story, perhaps more serious, says that the Abyssinian is a descendant of the sacred cat from ancient Egypt, from the time of the Pharaohs.

It would even seem that Ramses II had one. We thus find the drawing of this cat on many Egyptian tombs.

Marshal Sir Robert Napier brought the first Abyssinian cat back to Europe in 1868. It was called Zula. It was exhibited in 1871 at the Crystal Palace in London. The breeders then decide to work on this breed of cat. They cross it with the British Shorthair in particular. Also called bunny Cat because of its large ears. The Abyssinian is recognized as a breed in 1882. It is exported overseas, to É the United States in the early nineteenth century. Since the second half of the 20th century, the Abyssinian cat is officially red in color.

The Abyssinian cat is characterized by its lively, alert, playful, and dynamic mind. Its owner must take care of It permanently or almost. Because the Abyssinian cat cannot stand loneliness. Thus, It must be occupied, either by caresses, which It loves or by playing with It. As such, It considers Its playing partners to be Its peers.

Sometimes turbulent, the best way to tame it is through play. In addition, the Abyssinian cat gets along perfectly well with dogs. However, better not to put a rodent or a bird nearby. It will be merciless.

The Abyssinian Cat needs space for Its well-being and thus constantly let off steam. Indeed, it is not an inactive cat, far from it. It’s constantly on the move and enjoys jumping, running, and playing. So a home with a garden is ideal. However, It can also be satisfied with living in an apartment, provided that it is spacious to meet Its needs.

Like all cats, the Abyssinian must undergo a battery of vaccines when young (with a booster each year): rabies, typhus, leucosis, and coryza must thus be anticipated. In addition, the Abyssinian is predisposed to catch amyloidosis from cats.

A particularly dangerous and fatal genetic disease. It comes from defective genes that have undergone a mutation. This pathology, contracted after the age of 5, leads to irreversible renal failure and therefore death . Another genetic disease is progressive retinal atrophy. The retinal atrophy gradually will make it blind.

Another problem faced by cats of the Abyssinian breed:  feline neonatal isoerythrolysis . This genetic disease appears when the kitten’s parents are of different blood groups. The female nursing the kitten feeds it a substance called “Colostrum” which carries the mother’s antibodies resulting in fatal anemia in the kitten.

The life expectancy of an Abyssinian is between 10 and 16 years.

Because of its short coat, the Abyssinian does not require any particular maintenance, except for weekly brushing. More frequent brushing during moulting periods.

The Abyssinian Cat simply requires special attention during the moulting period, in particular when it comes to brushing. For the rest, it is a very clean cat. As with all, it is advisable to monitor the condition of Its ears regularly.

Very active, the Abyssinian requires a rich, balanced diet, supplemented with vitamins and minerals. Its diet will be more consistent than a cat of equivalent build. 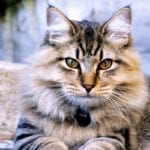