The American Bobtail is a fairly recent cat, mostly known in the United States and still little in Europe. However, It’s an adorable cat, very gentle and delicate with Its master, It has a behavior similar to that of a dog.

It does not present any health problem and its 2 varieties, short-haired and medium-long haired, are not difficult to maintain.

The American Bobtail is not descended from the Japanese Bobtail at all. Its story takes place almost exclusively in the United States. At least, that’s where we find its origin around 1965. In reality, the American Bobtail born of a “marriage” between a long-tailed cat and Yodi, a brown tabby cat discovered by John and Branda Sanders on an Indian reservation, Arizona.

They decided to bring It home and pair It and therefore mate It with a female Yodi.

Several kittens, from the same litter, wore a short tail. A friend of this couple, Mindy Shultz, looked more seriously at this new breed, determined to have it recognized. This was the case in 1989 even though the breed remains under development.

Its body: The American Bobtail is of medium to large size. He is muscular, athletic and gives off an impression of power. It is a semi-cobby format. His body is longer than it is tall. He has a full chest and strong hips. Males are usually more heavily built than females, which retain a certain femininity.
Its hair: The American Bobtail comes in 2 varieties: a first shorthair and a second mid-longhair. Each time, the hair is shaggy and rather thick at the neck, tail, belly, and hindquarters. Tufts of hair are there at the level of the legs for the long-haired variety. A seasonal variation is allowed in the medium-long haired subject, it is notable in the short-haired subject.
Its color: The standard of the American Bobtail is not very difficult since it accepts all colors in all possible formats in this cat.
Its head: It is large, without the slightest flat surface. Its powerful jaws are visible. In profile, we see a head with a slightly curved nose and a slight stop. The cheeks are full and the chin is strong.
Its eyes: They are large, fairly wide, oval in shape, and at an angle to the base of the ear. The color is often matched with that of the dress, as uniform as possible.
Its ears: The ears of the American Bobtail are medium in size, broad at their base, well open, and set fairly low. A little rounded with plumes at their end.
Its tail: It is quite short since it measures between 1 and 4 inches. It never goes beyond the point of the hock.

A little wild in appearance, like the Lynx or the Bengal, the American Bobtail is very gentle, strongly devoted to Its master and Its adoptive family. It’s quite playful, rather active, and likes to hang out in the apartment or hang out on the family sofa from time to time.

It enjoys the company of children. That of congeners and other animals doesn`t bother It either. Note that It has a behavior that brings It closer to the dog, which means that Its often called a “cat-dog”. Indeed, it can sometimes turn out to be glued to its owner.

It loves Its owner and is ready for any sacrifice. It knows how to adapt to all environments and lifestyles. It cannot stand loneliness at all.

The American Bobtail does not have a great need for physical activity. Therefore, living in an apartment suits It perfectly, as long as it has a balcony so that it can go and breathe the outside air from time to time.

Obviously, It will need accessories such as a cat tree or a scratching post, essential for Its personal development. It’s a calm cat who would rather laze around on a sofa than go out for a run.

The American Bobtail, in addition to being an excellent company, does not present a major concern in terms of pathologies. It has no hereditary to our knowledge. It, therefore, has a strong ability to resist diseases. However, it should be vaccinated against the usual pathologies of cats that are likely to develop, namely rabies, typhus, leucosis, and coryza.

The life expectancy of an American Bobtail is between 15 and 20 years .

Due to a fairly dense undercoat, the American Bobtail requires regular maintenance but not complicated since only one weekly brushing is enough for its happiness. There is no need to do more, especially for the short-haired breed.

Except during the moulting period, brushing should be done regularly but not with pronounced determination. You have to be gentle in this exercise to preserve your coat and undercoat. It’s possible to check the condition of Its ears and eyes from time to time to avoid any risk of an infection developing there.

The American Bobtail is easily satisfied with industrial food made from high-quality dry food or cat food. Note that due to its low activity, it is necessary to pay attention to its diet and not to give it more than what it can ingest.

At the risk of becoming overweight or even obese, which is not recommended for Its health. 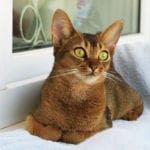 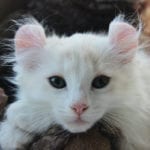