The American Wirehair does not differ too markedly from its very close cousin the Shorthair. Its character is generally the same and Its temperament, both calm and playful, corresponds. Its health is rather solid despite 2 genetic diseases and its fairly simple maintenance, with its 3 layers of hair.

The Wirehair originated  at a farm in New York State in 1966. It is the result of a genetic mutation. This is what Its first breeder, Joan O’Shea, immediately noticed.

She notices a cat with coarse and curly hair, which distinguishes it from the Shorthair. Its first name was “Council Rock Farm Adam of Hi-Fi”. It was later crossed too with another feline with a stiff coat. Amy and Abby were born.

The first was given to the Becks family. It was finally 10 years later, in 1978, that the breed was officially recognized by the American authorities.

The American Wirehair exhibits roughly the same behavioral characteristics and qualities as the Shorthair. Its an affectionate, calm but also a curious cat. It must be able to benefit from enough space to move around and thus wander in search of occupation.

It demands affection and attention. It’s not clingy but loves when you take care of It. It adores children, as It appreciates the presence of congeners and other animals.

It’s not temperamental. It can be hugged, but not too much. Finally, It’s endowed with great sensitivity. It is necessary not to rush It and to give It all the comfort It needs.

Due to its origins, the Wirehair is an outdoor cat. However, like the Shorthair, it is perfectly suited to apartment living. Its space must be large enough to stroll and occupy the mind. Access to the air is preferable so that It can feel happy.

This feline knows how to adapt to its environment to get the best out of it, as long as it enjoys games and its mind is busy.

The Wirehair is a cat with solid health. But, due to its origins, it has a serious, irreversible genetic disease: polycystic kidney disease. In addition, It’s also prone to hypertrophic cardiomyopathy which makes the walls of Its heart thicker. Constant supervision by a veterinarian is required. Due to its coat, its skin can develop minor allergies.

It can get irritated if its owner does not take the necessary care. In addition, it is prone to ear infections.  It is also important to have it vaccinated against classic diseases in cats: rabies, typhus, leucosis and coryza.

The life expectancy of an American Wirehair is between 14 and 18 years .

The particular coat of Wirehair must be maintained regularly, by means of weekly brushing. Grooming once a month is also desirable. For once, it is possible to approach a professional in order to avoid any complications with its dress. Be careful, brushing too hard can damage Its dress.

One brushing per week is more than enough for this cat. In addition to this, it is worth cleaning the ears regularly as the inside tends to become oily, which promotes the development of germs and parasites. Wirehair nails should be cut twice a month.

Like all cats, the Wirehair must be fed according to its state of health, its morphology, and its daily energy expenditure. It needs around 150 grams of high-quality kibble per day. Be careful, overeating can lead to obesity. 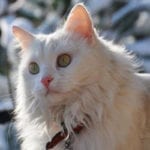