The Bombay Cat is a cat that looks very similar to the American Burmese. Moreover, it is the result of a cross between the Burmese and a shorthair. The Bombay is affectionate, tender, eager for tenderness, and hugs.

It is an indoor feline, who prefers to bask in the warmth rather than risk adventure. It’s not particularly athletic and it will be necessary to take care of Its diet. Very sociable, It appreciates children, other animals, and congeners. Plus, It doesn’t meow much.

The Bombay is considered the little brother of the American Burmese. It’s therefore far from the Indian city which bears It name, and which has nothing to do with this breed which comes from the United States.

The Bombay Cat was created by Nikki Horner in the middle of the 20th century, an American breeder who dreamed of owning a panther. This cat looks like one of the heroes of the Jungle Book.

Bombay is the result, after a few trials, of a cross between the American Burmese, in a more sepia tone, and the black American Shorthair. In 1972, It gave birth to 27 litters from Bombay. It was after this long and tedious work that the breed was finally recognized for its true value, in 1976.

The Bombay’s great intelligence will quickly allow It to fend for Itself in Its home. Be careful, It’s not necessarily very independent, but It will quickly understand how to open the fridge door, for example. This intelligence contrasts with the lack of mistrust that this cat has when It’s outdoors.

Thus, It will most often have to wear a leash. Fortunately, It does not refuse it. It’s a sensitive cat, in perpetual request of affection and of cuddles. It doesn’t like being alone for too long.

It’s also aideal guardian for children, with whom It will play without flinching. It appreciates the presence of congeners and other animals. It meows little and ultimately makes little use of Its vocal cords.

The Bombay is a cat intended for neophytes or owners with a little experience. It is not a difficult feline to live with and complicated to understand. The Bombay is not necessarily made to live outdoors. An apartment fits It like a glove since It appreciates being warm in Its cozy nest, like a pasha. It’s very social and an active household will be ideal for It.

The Bombay Cat has great and good health, which can keep it alive for up to 20 years if all goes well. It does not know of any hereditary disease. Of course, like all cats, It must be vaccinated against all classic diseases: rabies, typhus, leucosis, and coryza. For the rest, regular cleaning of the teeth is recommended to prevent tartar deposits.

Its lack of physical exercise is not a problem if Its food intake is respected.

The Bombay requires regular brushing but ultimately not such extensive maintenance. It is quite simple actually. Do not forget to remove Its dead hair to allow It to keep the shine of Its black dress.

In addition to a thorough and meticulous weekly brushing, the Bombay should have its ears and eyes cleaned fairly often. Finally, a good tooth washing is perfect regularly to avoid the deposit of tartar. An appointment with the veterinarian twice a year, including once for a vaccine booster, is recommended.

The Bombay must have a diet adapted to its lifestyle, health, and morphology. It does not perform a plethora of daily exercise. In fact, It does not need to be overfed, otherwise, It will experience overweight or even obesity, which would be harmful to Its health.

Do not hesitate to contact a veterinarian to ensure the right doses to give It. 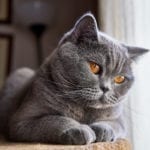