The secret to the British Shorthair’s popularity, both in its home country and in many other countries, can only be explained by its irresistible teddy bear tunes. Its success with families also comes from its balanced and engaging character.

It knows how to show Its affection for Its teachers and children, but It also values ​​Its autonomy.

Built all round and powerful, it appreciates moments of play as much as moments of rest, in the comfort and safety of the home.

The ancestors of the British Shorthair are cats who had known how to adapt to the harsh climatic conditions of the British Isles, in particular by developing a sufficiently dense coat to protect them from bad weather and cold.

Harrison Weir, one of the English cat breeding pioneers, founder of the National Cat Club, and organizer of the first cat show in London in 1871 was instrumental in the development of the British Shorthair.

A female of the breed was exhibited from this first edition which took place at the Crystal Palace. The cat did not go unnoticed, with its beautiful blue coat and amber eyes.

The 2 World Wars were very close to wiping out the British Shorthair. Both in the interwar period and after 1945, many breeders crossed with Persians, then Russian Blues and some Carthusians, in order to rebuild the numbers.

The Persian’s input gave a long-haired version of the British, called the British Longhair. Meanwhile, other breeders have sought to preserve the lines of British cats shorthair. Their efforts ended up paying off since, by the 1970s, the British Shorthair was no longer threatened.

Today the British Shorthair is one of the most popular cats in the UK.

Thanks to its balanced temperament, the British Shorthair is a pleasant companion for all members of the family. It’s very attached to Its family, but It still retains a certain independence. It’s therefore not the kind of cat to behave like a “pot-of-glue” with its owner.

It knows how to be discreet, both by his attitude and his little meows.

Without being totally inactive, the British Shorthair does not spend Its days running everywhere. It’s very calm, yet occasionally flaunts Its athleticism when playing or exploring Its little world.

Its character, both calm and playful, makes It  the friend of children.

Intelligent, friendly, and curious, It does not shy away from strangers, which can also be a disadvantage for people with bad intentions.

Thanks to a great adaptability, the British Shorthair has been able to adapt to all living conditions, whether urban or rural. It systematically seeks the comfort and security of Its home, but It still needs freedom.

The ideal would therefore be, for It, to have a secure exterior, where It can express Its desires for exploration. It can also learn to walk on a leash. However, the ideal would be to have It wear a harness rather than a collar, for a better distribution of the tension on the body.

The main thing is therefore that this cat can move regularly outside while being protected from various external threats.

The British Shorthair is a cat to health globally robust, but the breed is exposed to certain diseases, primarily the polycystic kidney disease (PKD) and feline hypertrophic cardiomyopathy  (HCM).

Polycystic kidney disease is characterized by the formation of cysts in the kidneys. Over time, they multiply and expand, leading to kidney failure.

Feline hypertrophic cardiomyopathy corresponds, for its part, to the syndrome of thickening of the papillary muscles and the myocardium. It considerably alters the functioning of the heart. The British Longhair, Maine Coon, Ragdoll, and Sphynx are also among the breeds predisposed to HCM.

For the rest, regular care, an adapted diet, and up-to-date vaccines (typhus, rabies, coryza, feline leucosis) allow the cat to lead a long and quality life.

The life expectancy of a British Shorthair is between 15 and 20 years .

The maintenance of the British Shorthair is the same as for all other cats. It consists, as regards Its dress and its skin, to perform a good weekly brushing.

Maintaining this cat does not pose any particular difficulty, but this work should not be neglected, otherwise, its coat can easily lose its beauty and vigor. And by the same token, see its protective capacity deteriorate.

A brushing meticulous weekly is recommended, but it must become a daily during the molt period. This will eliminate as much dead hair as possible, which will not end up in Its digestive tract in the form of gastric trichobezoars ( hairballs ).

The other essential treatments concern the contour of the eyes and the ears (with adapted lotions and cotton), the claws (to be shortened regularly, especially if it does not come out much), and the teeth (1 or 2 dental brushings per week).

Because they can tend to be a little less active and are also a big foodie, the British Shorthair is at risk for obesity. Its diet must therefore provide It with enough quality protein while being low in lipids.

Food supplements, especially for vitamins, can be given to It with the advice of the veterinarian. 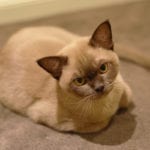