The Ceylon Cat is still an unknown breed. It’s originally from Sri Lanka, a country where It’s primarily used for hunting. Lively thanks to Its slender and muscular body, the Ceylon is tamed very easily. Although independent in nature, It becomes tender, affectionate, and very gentle for a family who will be happy in Its company.

With a playful temperament, It will enjoy spending time with children. It’s very sociable, especially with other animals of which It’s not afraid. In addition, It appreciates the caresses and hugs of Its owner. It needs a certain space to spend Itself and thus be fulfilled.

Although originally from Sri Lanka, the Ceylon cat holds some characteristics of Felis chaus, a cat from ancient Egypt. The breed was first discovered in the early 1980s in Sri Lanka. The breed has been able to develop with crosses of local cats and those which arrived on the coasts of the Indian Ocean thanks to the boats.

With a proud temperament, the Ceylon cat knows how to be gentle and caring with its owner.  It’s very intelligent, lively, and athletic. It must have sufficient space to exercise and avoid getting stuck.

In addition, this cat is particularly cheerful, sociable, whether with other animals or with children, with whom It has fun without flinching.

It asks that we take care of It and It makes It feel good, whether by Its regular presence without being untimely and Its few moments of cuddling always appreciable.

The Ceylon Cat requires to have a certain space so that it can work out and eliminate its calories. Originally, it is a hunter cat. It is therefore not trivial if, in the garden, It goes hunting for rodents or birds. If living in an apartment, accessories such as a cat tree are mandatory.

Due to its Sri Lankan origin, the Ceylon cat does not experience any major or hereditary pathology. Like all cats, it should be vaccinated against common diseases: rabies, typhus, leukosis and coryza.

It’s a short-haired cat. Ceylon therefore does not need a daily brushing session. One per week is sufficient unless it tends to lose too much hair.

In addition to Its weekly or daily brushing, as desired, attention should be paid to Its ears and eyes. Regular washing should be done to avoid infection. Approach a veterinarian to learn the right actions and thus avoid hurting your protection.

The coconut pulp is Its little pleasure, Its treat Do not hesitate to give it regularly. In nature, it does not feed exclusively on animals. It must therefore benefit from food rich in protein and balanced, based on high-end croquettes. 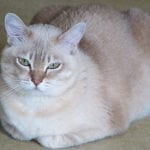