The Chausie Cat is basically a breed resulting from a cross between a fairly wild cat and another more domestic. It has been able to blend into the human universe for several decades. It’s both gentle and lively, climber and attentive, very intelligent, and sometimes stubborn.

It demands affection, tenderness, and doesn’t like to feel rejected. Its master must take time for It. It will feel at ease in a spacious environment. Its maintenance is quite easy and its appreciable character.

The Chausie Cat is a hybrid breed, born from the cross between a domestic cat and a chaus . Indeed, the Chausie descends from Felis Chaus, an Egyptian cat who accompanied the reign of the Pharaohs in ancient Egypt. Thus, we find many Felis Chaus on the tombs of the Pharaohs.

Its appearance in the life of every day is more recent, dating back to the second half of the 20 th century. The Chausie Cat appears especially in North America and Southeast Asia. It’s also descended from Abyssinians.

The breeders wanted to create a new breed that was more exotic, even more feline, but endowed with a gentle and docile character destined to conquer hearts. The LOF recognized it in 2003.

Despite its wild origins, the Chausie cat has become over time a very sociable cat. However, it is not necessarily suitable for families with very young children. Indeed, It can be quite aggressive with the youngest and babies. In fact, you must always keep an eye on it.

It’s a fairly gentle and docile feline, which is easily tamed. It does not like solitude even if It’s independent. It has a playful character. It demands constant attention. It’s resentful. It’s also very active and athletic.

It likes to climb everywhere. Thus, fragile and precious objects do not necessarily have their place in the Chausie play area. In addition, It loves cuddles and does not hesitate to cohabit with congeners like other animals.

The Chausie requires a certain habit in the possession of cats. Its master should not be a neophyte unless it learns very quickly. The Chausie requires time and patience. Above all, its environment must be spacious. Thus, a simple apartment might not be enough for it.

It must have a fairly large house with, if possible, a garden. It has an adventurous nature and will not hesitate to go find some preys

Strictly speaking, the Chausie cat does not have any hereditary diseases. It’s simply prone to certain digestive problems. In fact, gluten-free foods are sometimes recommended to improve the transit of this cat.

Like all felines, a regular visit to the veterinarian is desirable. This will allow It to prevent the development of certain diseases. In addition, It must be vaccinated against rabies, typhus, leucosis and coryza from an early age. A booster of these vaccines should take place every year.

The maintenance of the Chausie is quite simple. Indeed, it only requires weekly brushing to prevent the formation of hairballs. They can cause intestinal obstruction if It swallows it too often.

The Chausie cat does not need special attention for its hygiene. Its coat simply requires regular brushing to allow it to retain its shine and its particularity.

the Chausie can’t stand industrial food. Its digestive problems often result from this. Thus, you should provide It with a gluten-free diet. It appreciates human food like meat or fresh vegetables. 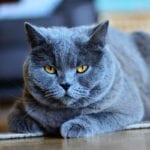 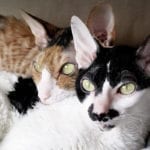