The Cornish Rex Cat is a rather rare cat, but very endearing and attached to its master. It behaves like a dog since It doesn’t hesitate to follow Its owner around the house. Indoor cat, Its fragile appearance actually hides an athletic body and a very good resistance to everything.

It has a kitten character throughout  Its life, is active, cheerful, and playful. The only downside is that It meows quite regularly, in a shrill voice.

The Cornish Rex Cat as we know it today was born on July 21, 1950. On the property of Mr. Ennismore, her cat gave birth to a litter of which one of the kittens presented an astrakhan coat, present of big ears and a rat tail.

This kitten, preserved, is named Kallibunker. Then, when It wanted to have it neutered, Its veterinarian advised him to breed It in order to confirm descendants with the same particular coat.

Kallibunker’s pups had the same characteristics, with a more curly coat. This was the case for example of Sham Pain Chas, the only male in Kallibunker’s litter. A few years later, a small group of breeders crossed Sham Pain Chas with fellow breeds with ordinary hair. This resulted in a new variant of Cornish Rex.

The Cornish Rex is quite a Meowth cat. That is for the disadvantage side. It has a fairly piercing voice which can be annoying in the long run. In addition, it is a very active, intelligent, and curious cat.

It keeps the character of a kitten almost throughout Its life, which makes It endearing, but above all dependent. It’s very attached to Its master and acts a bit like a dog. You might think that its very thin coat makes it fragile.

Quite the opposite, the Cornish Rex is a fairly solid breed and above all an athlete. It’s a charmer, player, will get along perfectly with children. It cannot do without the company of Its master.

The Cornish Rex Cat is above all an indoor cat, which appreciates the comfort of the premises. It will have to have several accessories to take care of and also to spend, like a cat tree, almost compulsory.

It can go back and forth on a balcony if Its master has one, or in the garden. It is not recommended to let It roam outside as It pleases, as it could face bad encounters.

The Cornish Rex has rather robust health. It is a little afraid of very cool temperatures but tolerates fall or the beginning of winter very well. Since It’s an indoor cat, It shouldn’t be faced with freezing cold often. Furthermore, It does not develop any hereditary pathology.

This makes It a disease-resistant cat, even though It may develop several classic cat diseases over Its 15-year life. This is why It must be vaccinated against rabies, typhus, leucosis and coryza.

The life expectancy of a Cornish Rex is between 12 and 15 years .

The main disadvantage of the relatively easy maintenance of Cornish Rex is that it preserves the ripples. It is possible to use a baby brush or a fine comb to handle the rather short (sometimes a little longer) hairs of this cat. Regular brushing should occur.

In addition to a light weekly brushing, the Cornish Rex simply demands that Its ears be cleaned once a week with lotion and cotton. Never use a cotton swab, which could damage this cat’s ear canal.

The Cornish Rex’s diet should be complete and balanced. Thus, it must be able to meet its daily energy expenditure. It can be fed with human food without any problem. You can feed it fish, meat, fresh vegetables, and starches without any worry. Fats should not be given to It often. Remember to keep water always by its side. 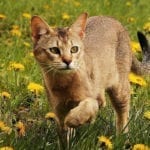