The Devon Rex Cat is an ideal cat for a family. Although physically atypical with its large ears, the Devon Rex Cat possesses a benevolent and gentle character towards humans and other animals that may surround them.

It’s very intelligent, sociable and above all wants to be cuddled by Its owner and Its family. It can thus spend hours on the shoulder of Its owner or in his arms. It has trouble keeping a place and likes to play with children, bouncing all over the place.

Its very short fur and the relative length of its reformation make it one of the least allergenic cats.

As the name suggests, the Devon Rex Cat is originally from Devonshire, England. It is the result of a genetic transformation on the part of Beryl Cox. Cox decided to cross a domestic cat with a cat with curly hair. Kirlee was born, and with It the Cornish Rex appeared through a breeding program.

This breeding program, with several cats, gave birth to many kittens. All had a stiff coat, not curly. The annoyance in question was that of the Devon Rex.

However, the Devon Rex breed was not recognized until 1979.

The Devon Rex Cat needs constant attention. It’s constantly on the lookout for hugs, caresses from Its owner, and its adoptive family. The Devon Rex is an atypical cat but so endearing. It can’t stand loneliness. It shows a poignant gentleness.

It is a very intelligent, lively, happy cat breed. Thus, It adapts very well to the presence of children. Also considered as a small monkey, the Devon Rex likes to climb, jump. It’s full of energy. An indoor cat tree is often recommended.

The Devon Rex can live very well in the countryside or in the city. Due to its constant energy, a garden corner would be a luxury. In an apartment, you have to provide It with accessories such as a cat tree.

Because of a very fine and rather short coat, the Devon Rex is particularly sensitive to outside temperatures, and to cold in particular. It’s therefore not advisable to leave it outside in the winter. Besides, It’s also susceptible to skin infections. It should be monitored at all times, especially after playing outdoors.

The Devon Rex is also prone to ear infections. At the genetic level, It can develop myopathy. It’s important to vaccinate it against all classic diseases in cats: rabies, typhus, leukosis and coryza.

The life expectancy of a Devon Rex is between 15 and 20 years .

Unlike other cats, you should never brush the Devon Rex. Instead, it’s a question of rubbing with a soft glove or a cloth, once or twice a month. The very fine hair of the Devon Rex allows it to clean itself daily without any worry.

Beyond the monthly or even bi-monthly rubbing, the Devon Rex requires special attention at the level of Its eyes. This cat tends to secrete more than the average. In addition, it’s advisable to regularly clean the ears, which are prone to infections because they have no protective hair.

Is Devon Rex Right For You? 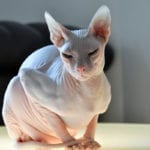