The Donskoy Cat is one of the few hairless cat breeds. It’s best known for Its great kindness and lack of aggression. It’s very comfortable with Its adoptive family. It cannot stand loneliness and can follow Its master everywhere.

It’s also endlessly active, curious, and intelligent. Its maintenance is very simple and its health quite robust. It consumes a lot of food to compensate for the lack of hair.

The Donskoy first appeared in Russia, in the Rostov region, in 1988. It was on this date that a woman named Irina Kovaloyva discovered a blue-cream cat in the street. This cat presented many unstacked patches. She, therefore, decides to keep It at home.

Then, this cat named Varya gave birth to several kittens which all had the particularity of being born naked. Kovaloyva, in fact, decided to show this peculiarity which in no way resembled the Sphynxes to the breeder Irina Nemikina.

Irina developed the breed, later named Donskoy, through a few crosses. The Donskoy is, like the Sphynx, one of the only breeds of hairless cats in the world. It is therefore easily identifiable.

The Donskoy is an extremely kind cat devoid of aggression. The proof, when it has to undergo an attack of a congener, it is unable to react and respond. In fact, it is strongly recommended not to let this feline go outside. The Donskoy is tender, sociable, and affectionate with Its master and Its adoptive family.

It will never hesitate to follow Its owner everywhere in the home. It can turn out to be a little clingy at times, but It does without a second thought because It can’t stand loneliness. It’s also hyperactive and keeps moving. It’s naturally curious and therefore enjoys discovering Its environment, and enjoys playing with adults and children.

Due to its natural impossibility of defending itself, it is strongly recommended to keep a Donskoy in an apartment, or in a house with a garden whose fences are well closed. It should not be able to meet a fellow-creature who would hurt It. In addition, an apartment makes life easier when the temperatures are very hot or, conversely, very cold.

Indeed, the Donskoy Cat does not appreciate the hot weather and harshness of winter. Its naked skin prevents It from being protected. In the apartment, It should have access to accessories to stretch Its legs and have fun. A cat tree is therefore compulsory.

The Donskoy is a cat that is lucky enough to be able to live long enough. It usually solid health accompanies It throughout Its life, It can go up to twenty years. Donskoy is subject to pulmonary infections, which should be prevented in particular in winter by limiting its exposure to the cold as much as possible.

In addition, it is mandatory to vaccinate this cat against traditional feline diseases, namely rabies, typhus, leucosis and coryza.

The life expectancy of a Donskoy is between 12 and 15 years.

Due to the lack of hair, there is no need to brush the Donskoy cat, it would do nothing and only irritate Its skin. In contrast, the Donskoy tends to sweat like the Sphynx. It’s desirable to give It regular baths, or at least wash It with lukewarm water, once a week. This shouldn’t be a problem since this cat enjoys the water.

In addition, some usual checks at the level of Its eyes as Its ears are desirable.

The Donskoy is a very greedy cat because It must ingest many calories to compensate for the lack of hair, and therefore to maintain Its body temperature at a good level. It’s satisfied with industrial food, even if Its diet can be supplemented with human food by avoiding the prohibitions. 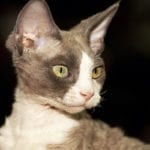