The Egyptian Mau is a hunter at heart. This cat needs spaces to spend daily life and thus feel fulfilled. Although independent, the Egyptian Mau has become a real pet cat, and an excellent one.

It’s rather docile, attentive, and shows great affection for Its owner. Excellent player, It will understand children and have fun with them.

Otherwise very calm and quite discreet. Be careful, It does not necessarily appreciate strangers, with whom It can be hostile.

The Egyptian Mau, along with the Persian, one of the oldest races there is. It’s goes back to the time of the Egyptian tombs around 1500 BC Its portrait adorned these tombs. Under ancient Egypt, It was considered a god, the cat of the Pharaohs.

This cat was also used to eradicate rats from agricultural plantations in Egypt, to scare away rodents. It is even, according to legends, the ancestor of all cats, descendants of Felis lybica ocreata .

During the first half of the 20th century, the Egyptian Mau has almost disappeared, partly because of the Second World War. It’s reborn from its ashes in Italy, thanks to Princess Natalia Troubetskoy who stumbles upon a kitten of this species in the embassy in Rome.

The little one will be named Lulu . She also discovers a male named Gregorio. Together with Lulu, they gave birth to Jojo, the first bronze-colored Egyptian Mau. Natalia Troubetskoï emigrates to the United States with her 3 cats: Baba, Jo-jo, and Liza. It’s from them that will arrive all the Egyptian Mau known today.

Although independent from its past and its origin, the Egyptian Mau has become an excellent pet cat. It appreciates peace and quiet and loves to be cuddled by Its owner and Its adoptive family. It’s more inclined to make the first move towards strangers It’s suspicious of.

Excellent player, It will have fun with children. Sportsman and hunter at heart, It should benefit from adequate conditions to exercise Itself every day.

Its need to spend Its energy obviously leads the Egyptian Mau to prefer a fairly spacious home with a garden or a terrace. Thus, life in the country fits It well, even if it is necessary to watch out for temperature changes.

In town, it is advisable to bring It the accessories necessary for Its development. A cat tree can do the trick. It will especially be necessary to occupy it to prevent it from basking, which would be harmful to its health.

The Egyptian Mau has no recorded and known genetic disease. It is fairly robust in health, even if it does not support temperature variations. It will therefore be necessary to be careful in the event of strong heat and cold waves.

The life expectancy of an Egyptian Mau is between 17 and 18 years.

The Egyptian Mau requires brief maintenance at the level of its coat. A single weekly brushing is enough to keep your hair in good shape.

In addition to weekly brushing, the Egyptian Mau will have to see Its teeth be washed regularly, to avoid the deposit of tartar. Its claws will need to be trimmed quite often as well.

Finally, it is subject to the development of an atrial parasite. Its ears should be treated with care. The veterinarian will be able to guide you through the procedure to follow.

The Egyptian Mau needs a good diet to thrive without becoming obese. Be careful, overeating would promote his overweight, especially if he does not spend enough. 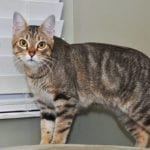 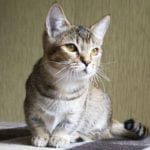