The Exotic Shorthair is the slightly longer-haired version of the Persian. It’s accompanied by some health issues like respiratory, dental, and eye problems during its life span.

Nevertheless, It’s an adorable, endearing, calm cat and slightly more lively than the Persian. It adores Its master and enjoys both lazing around and playing. It enjoys everyone: children, adults, congeners, and other animals.

The origin of the Exotic Shorthair is partly due to the presence of Persian in its genes. In the middle of the 20th century, the Domestic Shorthair struggled to find a place. It looks like the European Shorthair, but also the British Shorthair. As a result, it does not really assert itself and, to define it, the breeders decide to cross them with Persians.

Objective: to round their body a little. The majority of cats born came out looking like American Shorthairs. The more typical ones were put aside and, with a drastic selection, the breeders were able to determine and create the breed of the Exotic Shorthair, which is in a way a Persian with a little longer hair.

The Exotic Shorthair takes up most of the characteristics of the Persian. With one detail: It’s slightly more active, more lively, and therefore more playful than Its distant cousin. The Exotic keeps Its calm, Its composure, and especially Its great forbearance. It allows It to be happy when It’s surrounded by children.

This patience makes them a pleasant cat, very little meows, and affectionate. It appreciates the presence of Its master by Its side. The Exotic likes comfort and tranquility. It can also behave like a dog, who follows its owner everywhere. It’s never aggressive and likes the presence of congeners like other animals.

The Exotic Shorthair is above all an apartment cat. However, It needs to be exercised, otherwise, It will gain weight, possibly becoming obese. It should therefore not spend all of Its days slumped. Its a cat who enjoys playing indoors.

It will be interesting to stimulate It with games. Accessories for fulfillment and well-being are essential. In addition, It does not fear loneliness and can therefore remain alone in Its home without being afraid or stressed.

The Exotic knows some genetic diseases, which It inherits from the Persian. Because of Its crushed face, It may be the victim of  deformation of the jaw. It may also have breathing problems, feeding difficulties, or simply dental pathologies.

This feline also has the ability to have often wet eyes. They should be cleaned to prevent eye disease, of which there are many. Finally, it is important to vaccinate it, like all cats, against classic pathologies: rabies, typhus, leucosis, and coryza.

The Exotic Shorthair does not require complicated maintenance. However, it is essential to brush it regularly to meet the requirements of its short coat, but with a significant undercoat. In terms of pure maintenance, it must also be activated daily so that it avoids getting fat.

A minimum weekly brushing is required so that its hair retains its vigor and beauty. In addition, because of Its predisposition to eye diseases, it is necessary to clean Its eyes regularly, using a lotion that is special for cats. Its master must be gentle and delicate.

The Exotic Shorthair has a predisposition to obesity. Its diet should be closely monitored. It is advisable to give It around 80 to 160 grams of high-quality kibble per day. Of course, this varies depending on Its physical activity. It must be exercised daily to avoid being overweight, which would lead to other more serious pathologies. 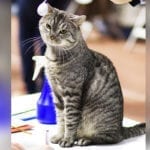 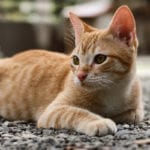