The German Rex Cat is not a very well-known breed if one leaves the German borders. And yet, It is an excellent pet cat. It’s gentle, affectionate, lively, able to live in an apartment as well as in the countryside. It presents no difficulty in maintenance and does not have poor health.

The German Rex is a lesser-known breed of cat than the Devon Rex or the Cornish Rex. Yet this is a breed that grew out of a spontaneous genetic mutation, and just as lovable. It appeared in 1946 across the Rhine. The first cat of this kind was called Lämmchen. It was found in the gardens of a hospital.

When It gave birth for the first time, Its kittens had a fur similar to that of Rex Cornish, curly, but more dense and tight. The breed was officially recognized in 1982, but is not very developed, especially outside Germany.

They say that the German Rex has a character that resembles the European shorthair. It’s therefore patient, very sociable, calm, and above all balanced. One of its primary characteristics is to be constantly lively.

It adores Its master, is attentive and affectionate with him as well as with Its family as a whole, and with children in particular. It also enjoys the company of fellow creatures and other animals. It’s full of life, a player with Its master as with the youngest. It never has any mood swings.

It is a cat that adapts to all types of environments. It is as comfortable indoors as it is outdoors. Outside, It won’t hesitate to use Its hunting skills. This will allow It to run after rodents,  climbing trees, and stretching Its paws in the fields.

It does not really like the cold, and therefore will not hesitate to want to come back, It will let you know that by meowing.

The German Rex Cat has the particularity of almost never getting sick. It’s blessed with iron health and has no genetic pathology known to date. Obviously, it should be vaccinated against the usual diseases of cats that have no treatment, namely rabies, typhus, leucosis, and coryza.

For the rest, It simply has trouble in winter when the temperatures are very negative. Its short coat and the absence of guard hair is one explanation.

The life expectancy of a German Rex is between 9 and 14 years.

Its short, fluffy coat simply calls for regular brushing. No baths are needed Especially since it hardly loses any hair.

In addition to Its weekly brushing, it is advisable to check the condition of Its ears and eyes from time to time to anticipate a possible infection.

The German Rex feeds almost exclusively on high-quality kibble. Its ration varies between 60 to 100 grams daily, depending on its physical activity and calorie expenditure. 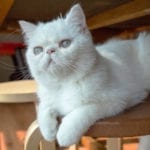 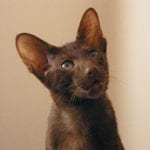