The Japanese Bobtail Cat is one happy and playful cat. It will bring happiness to your home. It never sulks, except when you let It go. It’s curious and intelligent. It needs the constant presence of Its master.

It’s blessed with robust health. Its maintenance, for its 2 varieties, is not very difficult. Finally, it adapts very easily to its environment, which is a significant advantage.

The presence of the cat in Japan is not recent. It’s first arrival from China dates back to the 6th century AD. The Japanese Bobtails were one of those felines who had the chance to discover the island of Korea. During, the 10th century, Idi-Jo Emperor ordered to use the cats to repel rodents, including mice, in order to preserve Its manuscripts.

Short-tailed cats are preferred by Asians and especially Japanese.

The Western world discovered the breed in the midst of WWII. In 1968, a breeder by the name of Elizabeth Freret imported to the USA 3 Bobtail. The breed was recognized in 1976 by the most important American feline association.

It presents the many qualities of oriental cats. Namely joy, good nature, and a certain playful side. It’s sometimes mischievous and demands the presence more than anything of Its master as well as Its adoptive family.  It will only be saddened to find that It’s not taken care of. It needs attention as it knows how to give back.

It’s lively but also knows how to be calm, gentle, and affectionate. It’s always in a good mood and above all very curious. A curiosity that It puts at the service of Its intelligence and which necessarily helps It in Its small daily outings.

Because this feline is also quite sporty, which forces it to exercise daily. Do not hesitate to teach It tricks, It loves it and it keeps  It awake.

It’s as comfortable indoors as it is outdoors.A house with a garden or a simple apartment will both suit it. It adapts very well to its environment. It just has to go out daily to stretch Its legs.

Providing it with home accessories  will be necessary to ensure that It has enough movement and exercise. In addition, It’s quite fond of water

From what we know, the Japanese Bobtail does not present, for the moment, of hereditary disease. It’s not necessarily predisposed to develop one disease over another. Like all cats, they need to be vaccinated against rabies, typhus, leucosis, and coryza.

Besides, It has solid health, whether in the short-haired or long-haired variety.

The easy maintenance of the Japanese Bobtail essentially comes down to a weekly brushing. Note that if the short-haired variety loses only a little hair during its moult, the medium-long haired variety experiences a greater moult.

It will therefore be necessary to redouble our efforts during this period. Use a soft brush to keep the beauty of Its coat.

Apart from regular brushing as well as occasional grooming, the Japanese Bobtail does not need any further attention. However, it is always possible to check the condition of Its ears.

Its diet will depend a lot on Its lifestyle. This feline will be amply satisfied if it is fed with pâtés or simply high quality kibbles provided they are a bit moistened. 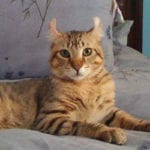