The Korat cat is very popular across the Atlantic and in England. It’s intended for calm people, who do not have a large family because It hates noise.

It prefers calm, quiet, tranquility. It’s quite a homebody but will fill its owner with happiness. Its maintenance is simple and its character perfect.

The Korat cat is a cat originally from Thailand. It gets its name from the region of Korat, where it was the symbol of abundant harvest and wealth, thanks to its gray dress and green eyes. In short, it’s considered a lucky cat.

At the end of 19th century, the Korat blue coat and shimmering silver was discovered by King Rama V. It’s exported out of Thailand to  the United States by the middle of 20th  century and  ‘Europe in the 1970s.

The breed is very popular in England and even across the Atlantic, while it is struggling to make a name for itself on the Old Continent.

Quiet and serene. two words that summarize the character of Korat cat. It’s a rather cushy cat who prefers the calm of an interior to the noise of the outside. It does not really stand the hubbub and will be more comfortable with Its master, in a warm corner or on a sofa.

It does not see the presence of congeners or other animals as a problem, as long they don’t come looking for It. On the other hand, It will be suspicious of strangers. It is curious and intelligent.

The Korat cat is an exclusively indoor cat. It should benefit from accessories to entertain himself and stretch his legs, even if he prefers to rest and laze around. It is also suitable for people who are quite homey, such as the elderly.

The Korat cat is renowned for its longevity. Indeed, this cat can live up to 25 years, which is very rare. However, although Its health is rather very strong, It’s susceptible to colds which can affect the respiratory tract.

It is therefore advisable to avoid the cold air, during the winter. The slightest draft can make It get sick. It does not have any hereditary pathology. Like all cats, it should be vaccinated against traditional diseases such as rabies, typhus, leucosis, and coryza.

The life expectancy of a Korat is between 20 and 25 years .

Its very shiny fur must be maintained with care, using a glove or a piece of flannel. It should be brushed fairly regularly. A single-pass will have the knack of removing dead hair, which is a plus. In addition, it loses almost no hair. This is a serious benefit for homeowners with allergies.

The hygiene of the Korat is based on a bi-weekly brushing. This is enough to take care of Its coat, which must remain intense and shiny. For the rest, it is always possible to check the condition of It eyes and ears. This will prevent infection. Avoid temperature variations.

A healthy and varied diet will be the basis of good health. It can be satisfied with high-quality croquettes but will be more fond of meat in order to meet Its protein and carbohydrate needs.

Starchy foods and fresh vegetables will complete Its meal. As this is not a fussy cat, care should be taken not to overfeed it. It does not tend to gain weight easily. 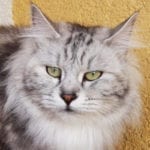