The Norwegian or Norwegian Forest cat has everything of a wild, rustic and solitary breed. It remains a very gentle cat that is totally adapted to human life. The Norwegian turns out to be an excellent pet cat.

It keeps Its hunting instincts, this medium to long-haired cat is very loyal to Its owner and Its adoptive family. Affectionate, intelligent, It likes to play with children, just as It likes to exercise daily, whether it is outside or by means of interior accessories.

The Norwegian forest cat does not give birth to any cross. According to the Norwegians, this breed has been around forever. It is about a cat resulting from natural evolution and would have been domesticated by the Vikings.

The toughest cats survived Norway’s dire conditions. Little by little, they descended into the heart of Europe.

The Norwegian began to make Itself known around the 1930s, during few exhibitions. However, it was not until the 1970s and 1980s, after almost disappearing, that the Norwegian entered French, German, and American homes.

In appearance, the Norwegian has everything of a wild cat. A hunter at heart, It can indeed fend for Itself. However, time has made it ideal for living in the company of humans. It has become an excellent domestic cat.

It needs to work out, whether through accessories like a cat tree or in the garden of at home. It appreciates hugs as It enjoys playing with children. Its a very affectionate cat towards Its adoptive family.

The Norwegian can live anywhere. In the countryside, in the mountains, or in an apartment. In the first 2 cases, It has no fear of the cold and can take the opportunity to go outside.

As for an apartment, It will need a cat tree to spend Its daily energy or any other toy that will prevent It from getting bored.

Its past as a wild cat gives the Norwegian particularly solid health. Robust,  it must be vaccinated against the main diseases known in cats: rabies, typhus, leucosis and coryza.

Only one hereditary pathology has the impact: type IV glycogenosis. It’s fatal with the youngest. Farmers are doing their best to control this disease. However, it remains present. Apart from this, It’s not subject to any other health problem.

The life expectancy of a Norwegian is between 14 and 16 years .

It must be brushed regularly, once a week at least, to prevent It from swallowing these dead hairs. Brushing also helps prevent tangles. During the moulting period, brushing should be done daily.

The Norwegian therefore requires weekly brushing, to be intensified during periods of moulting , with daily brushing. Like many cats, it is necessary to regularly check the condition of its ears.

The Norwegian feeds mainly on human food such as fish, vegetables, and meat. Its food must be balanced to keep it in good health and provide it with all the vitality it needs. 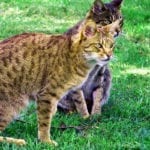