The Ocicat cat is a perfect cat in every way. It’s gentle, calm, but also lively and curious. It likes to move, but can also be satisfied with a rather long pose in the company of a master whom It will not want to leave.

The Ocicat cat originated in the United States, and specifically in Michigan. In 1964, Virginia Daly, an American breeder, wanted to breed Siamese. She crosses a Siamese with an Abyssinian. The surprise was the size since she quickly obtains a ticked Siamese.

However, another kitten in the litter had even more beautiful fur. The bottom of Its dress was ivory and Its speckles were golden.

She called this cat Ocicat, in reference to the Ocelot, a large American wild cat. The Ocicat was recognized in 1984. For the time being, Its breed is concentrated exclusively in North America.

The Ocicat cat is both alive and posed. It inherited, of course, characteristics of the Siamese and the Abyssinian. It’s a bit of a cat-dog in Its way of acting, since It knows how to respond perfectly to orders received.

It’s a gentle, friendly, and great company. It loves to be cuddled and pampered. Although independent, It nonetheless remains very attached to Its master. It can’t stand loneliness, but It doesn’t show off.

It demands attention. Its intelligence is remarkable, as Its sensitivity. This makes It an exceptional cat that should be taken care of. In addition, It’s very sociable. It accepts the presence of other congeners, animals. Very playful, it will be a perfect companion for children.

The Ocicat cat is not made to live in a closed environment exclusively. Thus, the apartment alone is not recommended. It prefers to venture outside daily. A house with a garden will be very well received by this feline.

It needs spaces to entertain Itself and stretch Its legs. But also to satisfy Its curiosity.

The health of the Ocicat is excellent. It has no known genetic disease. However, it could be affected perhaps more easily by certain pathologies, such as progressive atrophy of the retina, hypertrophic heart disease, or renal amyloidosis.

It must therefore be monitored. Just as it is necessary to prevent the risk of dental infections. For the rest, conventional vaccines are essential. That is, those against rabies, typhus, leucosis, and coryza.

The life expectancy of an Ocicat is between 10 and 15 years.

The Ocicat does not need any particular maintenance. Its owner will just have to make sure to brush It regularly. This will allow It to keep Its coat rather short and the liveliness of Its colors at the top.

In addition to ] weekly brushing, the Ocicat will need to be dewormed against fleas and other parasites that could bother It, especially if It spends most of Its time outdoors. Also, Its ears and eyes should be inspected often to prevent infection from forming. 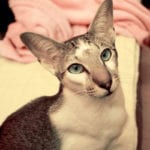