The Peterbald Cat is a very particular cat, which takes on the characteristics of the Donskoy and the Siamese, from which it descends. It’s therefore both hyperactive and possessive, but also quite talkative.

It may be off-putting, as it may appeal to some. It demands constant attention and doesn’t appreciate being left alone. Its maintenance is not necessarily easy but its health, solid.

The Peterbald Cat is a fairly recent cat since its appearance dates back to 1994. Its country of origin is Russia where it was born from a cross operated by Olga S. Mironova between a Donskoy and an Oriental.

The desire of the Russian woman was to combine the elegance of the Oriental with the particular skin of the Donskoy. This gave a very typical morphology to the Peterbald and allowed it to highlight that of the Oriental.

Then, little by little, the marriages with the Donskoy faded. Crosses with Siamese and Orientals were no longer authorized. The Russian feline federation wrote the first standard in 1996. This breed of cat is still too little known in Europe and America.

The Peterbald Cat is a cat who will never leave Its master alone . While some like this, others will not be fond of such a vibrant and outgoing breed. Indeed, the Peterbald inherited the behavior of the Donskoy as well as that of the Siamese.

An explosive cocktail. This cat is dynamic, lively, alert, but also possessive, and above all talkative. This cat can follow Its master everywhere at home. It’s constantly looking for attention, affection, to be at the center of the master’s concern.

It hates loneliness and is not necessarily independent. It can get cold. It appreciates the presence of children by Its side, same goes for congeners and other animals.

It doesn’t matter where the Peterbald lives. Above all, It needs the presence of Its master at Its side. It only lives for that. Nevertheless, it remains a very active cat. It will therefore undoubtedly appreciate the presence of a garden.

An apartment can suit It, provided you install many accessories, including a cat tree. In addition, it’s a feline intended for active, dynamic people, and not for the elderly. Because this cat, as cuddly as it is, needs to move and does not know how to remain inactive.

There is only one known hereditary disease in Peterbald: progressive retinal atrophy. It’s a hereditary pathology according to an autosomal and recessive world. There is a genetic screening test, to be performed as soon as possible.

In addition, it’s doesn’t support the cold, because of the absence of fur. On the other hand, It’s blessed with excellent health and very rarely falls ill. It is advisable, as for all cats, to have it vaccinated against the usual diseases, which are rabies, typhus, leucosis, and coryza.

The life expectancy of a Peterbald is between 10 and 13 years.

Contrary to what one might think, the absence of fur does not mean very simple maintenance. Conversely. Like the Donskoy, the Peterbald sometimes sweats quite regularly. Therefore, a weekly bath is required. No brushing, but it is important to put on a damp washcloth daily. It also helps to remove impurities that could settle on Its skin.

In addition to a regular bath as well as brushing with a damp washcloth, the Peterbald should be inspected at Its eye and ear level.

The diet of the Peterbald must correspond to its needs. They are active cats and therefore tend to burn their calories. Be careful not to overfeed It either, this would be harmful to Its health. 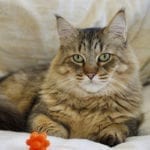