The Pixie-Bob cat is a fairly recent cat, which is distinguished by its fur which makes it similar to a Lynx. With a unique but extraordinary character, this cat will delight Its adoptive family.

It is known in 2 varieties: long-haired and short-haired. It requires a little maintenance. It’s a cute, cuddly, tender, and active feline.

The Pixie-Bob Cat is originally from the United States. It owes its creation to Carol Ann Brewer, who in the late 20th century, found this feline, it had features of resemblance to the Lynx. Suddenly, the woman scoured the Washington State area in search of similar cats. She only found 2.

From the union of these 2 felines, named Keba and Maggie, was born a kitten named Pixie. Its passion for this new breed of cat was transposed to other breeders who, from then on, accompanied Carol Ann Brewer in her approach. In 1998, the breed was officially recognized by TICA.

The Pixie-Bob is not descended from the Lynx at all. And yet, it is a true force of nature. It’s active, playful, and energetic. It’s a somewhat exuberant cat, but particularly fond of cuddles.

It loves being taken care of. In Its behavior, It acts a bit like a cat-dog. It can be walked on a leash if It got used to it. It also enjoys the company of children, with whom It will show enormous kindness.

It’s not necessarily hyperactive, but rather curious and with some strange behaviors. It also likes to play in the water.

This cat is above all an indoor cat, who will never be against a small daily outing in a garden if It has the possibility. It’s a feline who loves to run more than anything. It’s at ease in all environments. It will not hesitate to spend time on Its owner or next to him, to be pampered and massage Its head.

A fairly recent breed, there is little information about genetic pathologies. On the other hand, It may have a malformation of the legs. It rarely falls ill. However, It’s not immune to being affected by common feline diseases, namely rabies, typhus, leucosis, and coryza. Therefore advisable to have It vaccinated against these pathologies.

The life expectancy of a Pixie-Bob is between 12 and 15 years.

Its woolly coat needs a little more maintenance than most cats. The long hair needs more attention than the short hair. Thus, brushing should be daily for long hair, while it may be less frequent for short hair.

Apart from regular and careful brushing, in order to preserve its coat, the Pixie-Bob can also take a bath from time to time. It appreciates the water, it is also advisable to regularly clean Its ears and Its eyes.

The diet of this tomcat must consist of meat and fish. It prefers dry food to those moistened. In addition, it can ingest industrial food, such as high-quality kibble. The key is that Its diet is adapted to Its daily energy expenditure and meets Its needs. 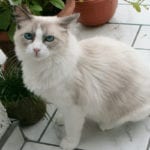