The Scottish Fold & Highland Fold are 2 cats that look very similar but are differentiated by their coat length. They can have folded or straight ears. Their character is close to perfection: calm, tender, neither too present, nor too absent.

It does not like solitude and loves to play with Its master. Its health is perfect and Its maintenance not too difficult.

The Scottish Fold & Highland Fold have a necessarily linked, common history. It began in the 1960s when a couple, Mary and William Ross, noticed a cat with folded ears on a Scottish farm. This cat was called Suzie. Suzie’s daughter, Snook, born in 1963 retained the same characteristic feature of the ear folded forward.

Suddenly, the couple decided to start breeding a new breed. The first crosses were between Scottish and British Shorthairs who were themselves, often, crossed with Persians.

Some long-haired kittens called themselves Highland. A setback was experienced, in 1971, when a large English feline club decided not to recognize the Scottish anymore, because their ears were too folded up, according to them, it could cause hearing problems. But their success was real in Europe and the United States.

The Scottish Fold & Highland Fold are sweet cats with a truly exceptional character. They know how to be discreet but can also have a little crazy quarter of an hour during the day.

They like to play with their master, as with children, which they love. Incidentally, they also tolerate very well the presence of congeners and other animals in their territory.

They are all very adaptable. They are not afraid of change. They are sensitive, caring, and very cuddly felines. They like to have a relationship symbiotic with their master, without being clingy, however.

Not aggressive, it’s important not to put them in relation to the danger from the outside. A very intelligent cat that will delight a large family or a single person.

This cat appreciates apartment life but also likes to have a little corner of greenery. What is recommended is to have a house with a small garden. It must be fenced to prevent your feline from being tempted by a taste for adventure.

Also to prevent congeners from taking the opportunity to come and annoy It or even hurt It. A small balcony may well be enough for it. It’s a calm cat which, in any case, will not cause any untimely overflow. Indoors only, it is advisable to place essential accessories for its well-being, such as a cat tree.

The Scottish fold and the Highland fold are robust, health iron. However, marrying 2 Folds cats is prohibited in order to avoid any problem related to the Fold gene. On the other hand, marriage with the British remains authorized.

Only a few worries related to these folded ears. For the rest, it’s about a very solid cat that does not suffer from any hereditary pathology. It’s only appropriate to have It vaccinated against the usual diseases: rabies, typhus, leucosis, and coryza.

The life expectancy of a Scottish & Highland is between 13 and 15 years .

Contrary to what one might think, the Highland Fold, although having a mid-length coat, does not require very extensive maintenance. Indeed, Its dress is always shorter than that of the Persian. Thus, a bi-weekly brushing is more than enough to satisfy its coat and to leave it silky. Brushing to be done less frequently on the Scottish Fold.

Beyond the weekly or even bi-weekly brushing, the master will try to be attentive to the ears, folded, and to the eyes of Its cat. They will need to be cleaned a few times to prevent infection from developing. 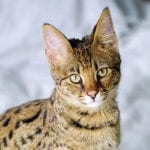