Native to Thailand, the Siamese is a medium-sized, handsome and elegant cat, with a beautiful light coat paired with much darker ends. Its liveliness and intelligence are well known, as is It’s very special temperament. It’s, in fact, a feline with a strong character, but also and above all quite changeable.

It alternates phases of extreme kindness and capricious moments. The Siamese is also renowned for the great attachment it shows towards its owner, as well as for its marked and frequent mowing.

The origins of the Siamese go back to the 15th century, or even the 14th century. The German zoologist Peter Simon Pallas (1741-1811) also evoked cats with characteristics similar to those of the Siamese, present in Asia during this period.

2 cats still unknown at the time, having the appearance of the Siamese, were presented during the Great Exhibition at the Crystal Palace in London in 1871. During the 1885 edition, a couple of Siamese, named Pho and Mia , attracted the attention of visitors.

They belonged to the sister of Major Gould, the British consul in Bangkok, they brought them back from Thailand to offer them to him.

Recognized 4 years later, the breed began to gain popularity in the interwar period.

Several other cat breeds were then created from the Siamese: the Balinese, the Himalayan, the Havana, the Oriental, or the Mandarin.

The Siamese breed was recognized by the Fédération Internationale Féline (FIFé) in 1945.

The Siamese is a cat who, in Its behavior, often goes to the extreme. It’s also moody . Thus, It can be very gentle and endearing one day, then become much more capricious the next. And to make Itself understood, It does not hesitate to use its voice. It’s, in fact, an extremely talkative feline.

This is a factor to take into account when adopting one because this characteristic can be annoying at times.

For the rest, the Siamese is a pleasant companion. It knows how to give affection, It’s very attached to Its master and likes to follow him everywhere. It’s also particularly athletic and, as such, needs frequent stimulation by activities, games, and interactive toys.

A large cat tree placed at Its disposal also allows It to fully express Its athleticism and agility.

Social and endowed with a strong personality, the Siamese is a cat that does not like solitude. Combined with boredom,  it’s likely to lead to unwanted behavior such as destruction.

The Siamese cat can adapt to most living environments, provided that It has someone to take care of, and that It enjoys a certain freedom of movement in a secure environment.

It can therefore lead a very happy and fulfilling life in an apartment if It’s regularly stimulated, has the opportunity to explore Its surroundings and remains active.

The Siamese also needs a clean space, where It can isolate Itself when It feels the need and find certain tranquility.

Although it enjoys overall solid health, the Siamese cat can however be subject to certain predispositions to diseases. One of them is amyloidosis, characterized by the constitution of protein deposits following a defect in the dissolution of proteins.

These deposits, called amyloid substances, affect the functioning of the affected organs. Usually, the kidneys and liver are affected in cats. Amyloidosis is also one of the main factors in feline diabetes.

The aortic stenosis is another of the diseases affecting the Siamese. It is a congenital heart disease defined by a narrowing causing a defect in the ejection of blood into the aorta.

The life expectancy of a Siamese is between 19 and 21 years .

The maintenance of the Siamese does not involve any particular difficulty. It is the same as for most cats, with basic daily care and others such as brushing, which is to be done once a week.

The weekly brushing keeps a coat and healthy skin while reducing hairballs that can form in Its gut. The hygiene measures to bring to the Siamese cat also consist in maintaining its claws, especially if it does not go out often, and to regularly clean the outline of its eyes and ears.

It can be washed occasionally if it becomes too soiled, provided you have accustomed it to baths in its youth, and use a suitable cat shampoo.

The Siamese’s diet is no different from that of cats of other breeds. It should be based largely on meat. The quality of animal proteins must be high. It is also important to ensure that the kitten has a sufficient intake of phosphorus, calcium and vitamin D, otherwise, disorders could occur during the constitution of its skeleton.

Is the Siamese cat right for you? 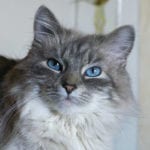