Have you always dreamed of having a little tiger at home? The Toyger cat, commonly known as the “tiger cat”, is one of them. At least, a real miniature tiger. It has Its physique, its elegance, and Its approach.

Its character is much more sociable. This fairly recent breed of cat has taken the fold of docility towards humans. The Toyger is adorable to Its owner, foster family, and even strangers. It’s lively, rather athletic, and loves to play with the youngest. It will suit everyone.

The Toyger cat has just been recognized by the LOOF as an official breed. This recognition dates from 2016. It is therefore a very recent breed.

The Toyger cat originated in the United States in the early 1980s. It was Judy Sugden, daughter of Joan Mill, creator of the Bengal, who gave birth to this mini-tiger. It is therefore the result of a cross between the Bengal and a domestic cat with a coat similar to that of the tiger.

The Toyger cat is intelligent and very sociable. It’s is the perfect companion for a family, since It’s very attached to Its owner and gets along wonderfully with children. It needs space to exercise, run, and climb.

It’s curious, affectionate and will not hesitate to approach strangers. It’s applicant caresses, hugs, of tenderness from Its adoptive family. The presence of other animals is not a problem.

It should be noted that this cat is easily tamed. It loves to learn a few tricks or orders to reproduce them. The only downside is, It tends to meow more than average.

Toyger needs space for personal development. In the countryside or in the city, it must be able to activate daily. A garden will do the trick in a house. Indoors, it is essential to give it a cat tree to climb and exercise. It’s not against a few daily outings on a leash.

Due to its recent breed status, genetic diseases may not yet be known. There are currently none. However, the Toyger could be susceptible to developing pathologies in the heart and airways.

The feline infectious peritonitis is also a source of problem for this breed of cat. Vaccination against rabies, typhus, leucosis, and coryza is mandatory.

The life expectancy of a Toyger is between 10 and 15 years.

Its rather short coat does not require any particular maintenance. Only a weekly brushing is sufficient for the Toyger.

In addition to weekly brushing, the Toyger may need to take a few baths if their coat is smelly. For the rest, monitoring is still required for Its ears, as in many cats.

The Toyger needs a high protein diet. Thus, It will find Its happiness in high-quality croquettes, as well as in terrines and pâtés recommended for It. On the other hand, avoid cereals. 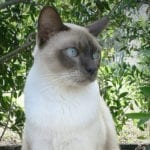