The Turkish Angora is elegant to look at. Its mid-long to long coat also has an advantage over other breeds.  It has a  light undercoat, which greatly facilitates its brushing and therefore its maintenance.

It stands up easily. It does not appreciate solitude but is, paradoxically, quite independent. This does not prevent It from liking the presence of Its owner, to whom It’s very attached. Agile, flexible, It’s also quite sporty.

It enjoys playing with children and its not bother with the company of congeners or dogs. Note that It particularly likes water and that It will not hesitate to immerse Itself in a sink or a bathtub.

The Turkish Angora originates from Angora, as the name suggests, a city in Turkey. The breed is very old since we could go back to the time of ancient Egypt. The long hairs and white fur were very popular with the Turks.

It officially landed in Europe in the 17th century. We owe its appearance to a Frenchman, Nicolas de Peiresc, and to an Italian, Pietro della Valle . It is part of the court of Louis XIII, Louis XIV, Louis XV, and even Louis XVI.

Its long hair attracts curiosity, Europeans were mainly turned towards cats with short hair. The painters were also inspired by this breed, very slender and pleasing to the eye.

However, the Turkish Angora almost disappeared. At the origin of the creation of the Persians, It becomes a victim. Fortunately, American and European breeders are united to give it a second life. It thus returns in force after the Second World War. Its breed was recognized in 1973 and the International Feline Federation did the same in 1988.

The Turkish Angora is very sociable although it also appreciates the tranquility. It’s independent but loves the caresses of Its master or Its family. It likes to be the center of attention, so much so that It can be a pot-of-glue depending on Its temperament.

For this purpose, It has a strong character. It’s active, lively, very intelligent. It has a playful spirit and indulges in this pleasure with children, which It’s particularly fond of. They generally get along well with their peers and other pets.

The Turkish Angora loves the great outdoors. Its independence goes hand in hand with Its need for freedom. Thus, It will appreciate life in the countryside. Apartment living can be a problem in the long run, unless It has the ability to go back and forth outside.

For this purpose, it will be necessary to be attentive to the parasites which it could bring back.

The Turkish Angora does not contract any particular disease. It is a very strong species. No genetic pathology is recorded. It will simply be necessary to ensure that it is vaccinated against all the classic diseases in cats: rabies, typhus, leucosis and coryza.

The life expectancy of a Turkish Angora is between 13 and 16 years .

Its maintenance turns out to be easier than another long-haired cat. And for good reason, it has almost no undercoat. Thus, regular, weekly brushing is sufficient. In summer, it can even be once every 2 weeks.

On the other hand, it must be daily during the moulting period, with avoiding that it swallows its hairs, which would cause the creation of hairballs, harmful to its digestive system.

The Turkish Angora simply requires special attention during the moulting period , especially when it comes to brushing. For the rest, it is a very clean cat. As with all, it is advisable to monitor the condition of Its ears regularly. It likes to be outside. It will be necessary to ensure that it does not bring parasites back to your home. In addition, this cat loves water and will not mind taking a bath from time to time.

The Turkish Angora needs a diet rich in protein, trace elements, and vitamins This allows it to keep a silky coat. You can also feed It a diet rich in fiber, which will help to remove any hairballs that may form. 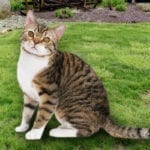