Cats are animals known to have eyes that are able to enter people’s souls. Cats with blue eyes reach another level of awesome! There is something special about them that leaves everyone spellbound. This is why it is impossible not to ask: Why are they so special?

All cats, at least once in their life, have had blue eyes, but most have not kept them. After birth, kittens’ eyes remain closed for the entire first week as they are creatures born with underdeveloped eyes.

By the time the eyes open, they are still developing as melanin is still forming; for this reason, the eyes are generally of a light or dark blue.

Not all kittens keep these beautiful blue eyes. In fact, most of them will develop their color when they reach 6-7 weeks of life; at this point, their eyes will have already changed color permanently.

Why do they have blue eyes?

The color of the eyes is due to the amount of melanin present in them, especially in the stroma, one of the three layers of the iris. Melanin is also responsible for the skin color of most living things, including cats. Eyes that have too much melanin appear dark, that is, brown or black. If, on the other hand, they have little, or even not present, the eyes are clear, that is, green or blue.

The amount of melanin responsible for eye color is usually decided by genes. In the case of the average cat, or of a mixed breed, it is something indefinite if the parent with blue eyes passes this gene to its kittens; which, on the other hand, is very probable and defined in the case of purebred cats with blue eyes.

However, most studies suggest that white-coated cats have a higher chance of developing light-colored eyes: amber or blue. Unfortunately, they are just as likely to go deaf.

The purebred white cat occupies about 5% of the entire cat population. Of this 5%, 15 – 40% are cats that actually have blue eyes. Not all white cats develop these amazing sky-colored eyes. On the other hand, when it comes to deafness, most of them, unfortunately, will become deaf.

It has been shown that feline deafness is rare among other pure breeds with other colored fur and cats with multicolored coats; however, purebred white cats are not as lucky. To make an estimate, we can say that a white cat with blue eyes has an 85% chance of becoming deaf, while cats that have only one blue eye will most likely become deaf in the ear that is on the same side of the eye. blue eye.

Having two eyes of different colors, or heterochromia, is a condition that affects the eyes of cats (and people); the cat has two different colors, usually, one eye is blue and the other orange, yellow, green, or any other light color.

Deafness, on the other hand, can affect both ears, but as mentioned above, it is very likely that it affects the ear that is on the same side of the blue eye.

albinism is a genetic condition where color and pigmentation are completely absent throughout the body. In fact, albino cats have a white coat and are in some way related to pure white ones, but beware the latter do not have the same condition. The cats and albino white cats can also look alike, but once that you look carefully you will begin to notice the differences.

Albino cats are quite rare. If you meet one, the identifying element to look for is the pink color of the skin and eyes (sometimes they can have very light blue eyes, they are also very sensitive to light). On the other hand, white cats have the appearance and characteristics of any other cat, apart from being likely to go deaf.

Why are blue-eyed cats deaf?

The answer is simple: Genetics!

As mentioned earlier, melanin and other key characteristics are carried by the genes. The gene responsible for white fur and blue eyes is also responsible for producing the hair cells in the ears, which are essential for hearing.

Can only white cats have blue eyes?

While blue eyes are not a blessing (or curse) with which only white cats are born, it is not common to see a black cat with blue eyes. On the other hand, it is very likely that cats such as black and white or multicolored coats with white markings will develop these blue eyes.

If you are looking for a cat with blue eyes, remember that some purebred and mixed-breed cats also possess these magnificent eyes.

The Himalayan cat, is a hybrid cat descended from the Persian and the Siamese. This beautiful creature is the result of the desire of some breeders to have a cat with a coat like that of a Persian and with the distinctive trait of the Siamese, that is those beautiful blue eyes!

Born in the ancient regions of Mesopotamia, the Persian is a breed that is known for its long, soft coat and rounded face. Its eyes can be of different colors, however, Persians who have a white coat almost certainly have blue or different colored eyes and as a result can also become deaf.

The Ragdoll is a unique and famous breed, originating in the 1960s. This cat gets its name from its inertia when picked up and from its slump on any surface, just like a rag doll! These cats have semi-long hair with spots and almost all cats of this breed have blue or light-colored eyes.

This cat has a smooth coat of medium length, a coat that can be of different colors, all of which accentuate the blue color of its eyes. Its spotted coat is just like that of the Siamese, which means it has darker shades on its face, ears, legs, and tail.

The Balinese is a cat that is considered the twin of the Siamese with the only difference of having a shorter coat. It shares many features with the latter, such as those awesome blue eyes!

Considered to be one of the oldest breeds in the world, the Siamese is known for its sophisticated and seemingly perfect appearance, with a lean, muscular body and a short, elegant coat. Elegance aside, this cat is known for its almond-shaped eyes which are always a very intense blue color.

The name Ojos Azules , which literally means “Blue Eyes” in Spanish, is a very rare breed among feral (stray) cats. They have become famous for their deep blue eyes that are certainly no less than those of all the races mentioned above.

Interestingly and also weird, the Ojos Azules is the only cat breed that has blue eyes and does not have a white coat!

Do you want a cat with blue eyes?

If you are considering getting a blue-eyed cat but don’t want to deal with various hearing problems, check out cats with multi-colored coats like the Siamese and Balinese. Their blue eyes are not associated with the dominant white coat gene, although they have a pale colored coat (perfect, right?)

If you are sure you are getting a blue-eyed cat and don’t care about deafness, you will find that this is not that much of a problem once you learn how to communicate with your kitty. 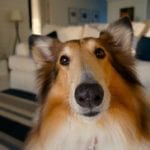