You surely know that your cat’s vibrissae perform essential functions, mainly helping them to find their way in space and to judge distances. But is this the only role of mustaches and how exactly does it work? You will be surprised to learn how important they are to your little feline. Let’s explore this very special attribute

What are the cat’s whiskers for?

The answer is simple: to move! A cat needs Its whiskers to properly understand Its environment. Without them, It risks walking clumsily and aimlessly. A cat’s whiskers are essential sensory organs, which help them detect movement, even in the dark. The real name of the cat’s whiskers is “vibrissae”, and it is not the only one to have one:  rats horses or even seals have them as well!

How Many Whiskers Does A Cat Have?

The number of whiskers in a cat varies from one cat to another, but there are usually between 8 and 12 whiskers on each side of the muzzle. These hairs are stronger and thicker than the rest of the coat, also composed of keratin. The area where the cat’s whiskers are implanted is particularly rich in nerve endings, which explains the extreme sensitivity of these organs.

A cat does not only have whiskers around the nose, vibrissae are also present above its eyes and on the back of its paws above the pads.

How Does The Cat Move With The Help Of Its Whiskers?

Measure the width of a passage

Thanks to the vibrissae that dot its body, the cat is fully aware of its own width and can determine whether or not it is possible for it to squeeze through a narrow passage. As we know, cats sometimes have the amazing ability to slip into tiny interstices!

This explains why the cat’s whiskers are usually so long: they help It measure Its own height!

With its whiskers, the cat can capture the variations of the air around it. It can thus determine the strength and direction of the wind: if it’s hunting, It will then make sure to hide Its smell, by positioning itself facing the wind. Thanks to its vibrissae, the cat is quite capable of hunting at night, since it manages to move and easily locate its prey, even in the dark.

it also uses its mustache to perform jumps. The vibrissae perceive the friction of the air, so the cat can adjust the force it gives to its leap. Likewise,  thanks to its whiskers that a cat will – almost – always manage to land on its feet: the vibrissae help it determine when to turn around to land optimally.

The cat’s vibrissae arranged around its nose, above its eyes, and on the back of its paws allow it to pick up the obstacles around it. This particular provision, therefore, prevents it from bumping into things! This is also why the cat has no problem moving around at night: to move forward, it trusts its sensory sensors as much as it does with its eyes.

To evolve serenely in its environment, the cat must also be able to communicate its emotions to those around it, whether they are its owners or its congeners.

Whiskers stretched forward, for example, will be a sign of some stress in your cat, while they will be pressed against Its cheeks if It’s angry. A relaxed cat will leave its whiskers straight and loosely positioned. Of course, it is also necessary to analyze the behavior of the cat as a whole to determine its mood: the position of its ears, its tail, its growls, etc.

Do Cat Whiskers Grow Back?

Don’t panic, although it does take a little while, cat whiskers do grow back eventually. But since your feline needs it to orientate and move around easily, It may find Itself lost for a while. A bit as if you,  had to walk with your eyes closed! 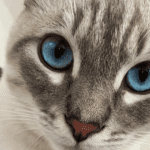