For some people, the sex of the cat is irrelevant when choosing. For others, on the other hand, it is a first-rate criterion, because it has specificities that it is imperative to know. It should however be remembered that the characteristics in question are very general and that they can vary enormously from one individual to another.

What should you consider when considering adopting a female cat ? This article should help you see more clearly.

Adopting a female cat: knowing the specifics of the cat

Again, all sorts of character traits are attributed that are supposed to be unique to female cats, but can also be found in male cats.

We often tend to think that adopting a female cat means that we will be dealing with an animal that is more cuddly, less aggressive, less distant, and less lonely than a male cat. This may be true in a good number of cases, but It’s not a given rule.

On the other hand, from a physical point of view, the differences are often more marked. In general, cats are smaller and lighter than their male counterparts.

There is, of course, also the question of heat which occurs in a female cat. It should be noted that during these periods, which begin from the age of 6 to 9 months, the cat may start to meow more frequently and ask for more affection and tenderness. It may also be more restless than usual and purr more insistently.

Adopting a female cat also means wondering whether or not you want It to reproduce. If the answer is no, It should be sterilized, ideally before It’s one year old.

There is generally less rivalry- driven behavior seen in females than in males. In other words, it is less common for 2 cats to fight with each other. However, there are exceptions.

If 2 female cats have incompatible personalities, it will be very difficult to get them to get along and cohabit without making a fuss.

We can also say that 2 cats of opposite sexes are less inclined to go towards physical confrontation, even if we cannot rule out any risk of conflict.

Why have It sterilized?

Depending on whether or not you want to have litters of kittens, you can decide to have your cat sterilized.

There are many reasons for sterilizing a female cat. Here are 2 of the most relevant: 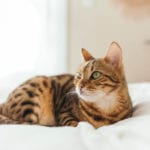