The Siamese Lynx-Point makes an impression among cat lovers in cat rooms. Although Cat Fanciers were fascinated with the new stripped-down pattern, very few breeders expressed sufficient interest in them and consequently continued to breed only the popular semi-pointed Siamese.

As a result, the popularity of Lynx stitch has slowly gained acceptance. Despite this, the diligence of reputable breeders who had an interest in preserving the Siamese Lynx has made it possible today for many to enjoy the unique beauty and personality of these purebred cats.

History Of The Siamese Lynx Point

The history of the Colorpoint Shorthair begins as early as 1902 when “tabby point Siamese” were produced and these were mentioned in a book called “The Book of the Cat” by Frances Simpson. They first appeared in Scotland, and more recently in 1944 – 1949, where they were referred to as “Silverpoint Siamese”.

They only became widely known in the years when they were introduced in 1960 at a cat show in London, England. In 1966, they achieved recognition by the Cat Fancy Board of Directors (GCCF) as Tabby Point Siamese and these cats are the basis of today’s Colorpoint Shorthair.

Physical Characteristics of The Siamese Lynx

The term “Colorpoint Shorthair” was coined to cover Siamese cats in other colors and patterns in registers that do not wish to include in the Siamese breed group.

Over time the first hybrids gained popularity, the tiger versions of the Siamese were introduced in the Colorpoint Shorthair programs in the four Siamese color varieties.

In CFA, these pointy tabby cats are called Lynx-Points (Snow Tiger) and are exhibited in their own “Lynx-Point class” like

Selective breeding between these hybrids to other Siamese breed improve and intensify the marking, type, and color of the eyes.

The physical characteristics of the Lynx Siamese have evolved over time and the current standards are as follows:

Often referred to as a cat-dog, the Siamese is a cat with a very particular character, very different from that of other breeds of cats. Indeed, the Siamese is a very demanding cat towards Its master, always in search of its attention. Here are the character traits that are often found in the Lynx point cat:

The Lynx Siamese cat is a very possessive cat. In general, It will designate one of the family members as Its master and build an intense relationship with It, which it will demonstrate by following It everywhere, physically, and with It many meows! Indeed, the Siamese is a very talkative cat, which can present a disadvantage.

Possessive, the Siamese can be invasive. If It feels that Its master is being attacked, It will not hesitate to take Its defense. Jealous, the Siamese will have difficulty cohabiting with other pets that could distract from its master.

Despite a character that could be described as difficult, the Siamese, fortunately, has many other qualities. It’s an affectionate and highly intelligent cat, so It reacts when called and quickly understands the prohibitions.

It is therefore a cat that lends itself better to training than other breeds of cats. It’s also a very playful cat, so care should be taken to leave enough toys available for It to use up Its energy.

The Siamese Lynx cat is therefore a cat made for those who wish to have a very present companion and who will know how to deal with its very particular character.

What does a Lynx Point Siamese eat?

The Lynx Point is a thin and slender cat, but he is prone to overweight. It is important to watch his diet in order to limit excessive weight gain, which could cause him problems, because of its long and thin legs, which cannot carry too much weight.

It is therefore advisable to give your Siamese food adapted to its age, its physical condition, or whether It’s sterilized or not. Indeed, a sterilized Siamese cat will have much lower energy needs than its unsterilized counterparts.

Although it’s very fond of it, avoid giving your Siamese dairy or creamy products. Indeed, It will have difficulty digesting them. Human food is also not recommended.

It is much more advisable to give premium cat food to your Siamese. Indeed, high-end kibbles have a double advantage: on the one hand, they are more nutritious. On the other hand, they force your Siamese to chew, which helps prevent certain oral problems in the long term.

If you are unsure of what food to give your Lynx cat, ask your vet. He/She will be able to advise you on the most suitable food for your Siamese.

What diseases is the Lynx Point Siamese predisposed to?

Siamese are predisposed to urinary problems. It is therefore important to provide It with fresh water so that it can drink often.

The Siamese cat also has a predisposition for pulmonary diseases such as asthma, or even certain heart diseases.

Finally, the Siamese cat is particularly affected by feline amyloidosis. This disease usually manifests in cats one to five years old, but does not exclude older cats. It manifests in the form of kidney failure or internal bleeding from the liver or pancreas, but also from other organs.

This disease is genetic and its trigger mode remains unknown, but some laboratories are aware of this research and in the course of developing a genetic test to detect this disease.

If in doubt, we strongly advise you to contact your veterinarian.

Price of a Lynx Point Siamese

The Lynx Point Siamese cat has a very special personality. The Siamese can be jealous and possessive and will not be able to be satisfied with a master who ignores It or does not pay It enough attention. In addition, Its master or future master should expect a chatty cat and be patient when necessary.

However, the Siamese Lynx Point, fortunately, has many qualities: endearing, affectionate, it will be an ideal companion for owners who wish to develop a special relationship with their cat. 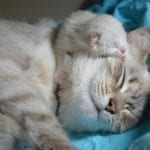