Anyone who has had a cat at some point will be confused by the shapes and positions cats take, and the strange angles they seem to love to sleep in!  cats are obviously very flexible and agile animals that can fit in places and in the strangest positions, and are also very flexible and athletic, which gives them a great advantage as small hunters.

A wide variety of factors that shape the cat’s conformation and skeletal structure combine to make them flexible, athletic, and firm on the legs, and this includes a number of unparalleled physical traits – not even dogs can compare!

If you’ve ever wondered how cats bend, flex, and move – and how they manage to find weird places and comfortable sleeping positions – read on to find out about cat anatomy and how this allows them to be agile and flexible.

The structure of the cat’s spine explains many of its range of motion and abilities by also allowing it to fully stretch or curl up into a small ball.

Humans have 33 vertebrae, dogs 35, and cats have 53! For animals with tails (such as cats and dogs) the same tail is part of the spine and contains some of these vertebrae – with the exception of the Isle of Man cat, a breed that has a shorter-than-normal tail or even absent.

Additionally, the range of movement and rotation of the human spine is limited, making our backs relatively stiff and inflexible, this is due to the connective tissue between the vertebrae – but cats have much more flexible connective tissue between each vertebra, giving it a wider angle of rotation and making cats able to fold their bodies into positions that not even human contortionists could hope to achieve! The connective tissue of the spine also acts as a cushioning pad for cats, allowing them to squirm and jump without taking a blow to the back or causing injury.

This flexibility also contributes to the cat’s fitness, the ability to fall on its paws – a process known as the cat’s self-righting mechanism. This mechanism is an instinctive movement that cats make in mid-air, it allows them to correct the angle of their body while they are in the air, so as to land on their paws.

Cats run very fast and powerfully, thanks to the extension and flexibility of their spines. A cat running at full speed covers an area about 3 times the length of its body with each step, this is due to the flexibility of the spine and the power in the hind legs.

The tail is an extension of the spine, not a bumpy addition, and cats have musculature in their tails that allows them to hold them straight, move and use them for balance.

Cats have a very sure-footed walk which is the result of the combination of their agility, paws, claws, and balance added by the position in which they hold their tails.

Cats can get into very tight places and when they stretch fully, they make themselves thin enough to pass through seemingly impossible spaces!

This is due to the structure of the cat’s shoulders and collarbones, which are very different from those of people.

The legs and paws

Cats have a lot of strength in the limbs, especially in the hind limbs, so much so that the average cat can jump up to 9 times its height from a seated position, we humans hardly reach the same height from the same starting point!

Cats also have a high range of rotation on their forelimbs, they use their hind legs to give strength for movement and their front legs to balance and turn. The strength of the hind legs, their flexibility, and softness allow cats to sit and still for a long time without going numb, allowing them to observe prey and immediately leap into action, leaping far away with precision and stability to hunt prey. 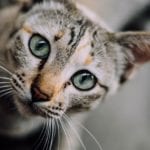