White cats are said to be deaf. But that’s not always the case. Sure, white fur and deafness are related, but the connection isn’t that simple. It is not a direct genetic relationship, it is not an exact science.

Contents hide
1 What makes cats white?
2 So, is white related to deafness?
3 Other reasons why cats are white
4 What are the chances of a white cat being deaf?
5 How do you tell if a white cat is deaf?

Just so you know, there is no ” whiteness ” gene in cats. It’s not a gene that makes cats turn white. In reality, the white color is caused by a “mask” gene; it is a gene that prevents the underlying color from showing itself.

So actually white cats have a gene for another color, but the “mask” gene doesn’t show it. This is because the masking gene prevents the development of melanin, and it is the melanin that causes the color of the cat’s fur to develop.

So, is white related to deafness?

Melanin affects the hair color of cats, but it also affects the cochlea of ​​the inner ear. If the mask gene prevents the development of melanin, the cochlea could degenerate shortly after birth thus making the cat permanently deaf.

This mask gene is sometimes responsible for blue eyes as well. So if a cat has blue eyes, It’s probably also deaf, and if It only has one blue eye, It may be deaf on that side only, and the ear cochlea on the other side will have developed normally.

However, things are not as simple as they seem. There are also other reasons why cats are white and other genes that can affect eye color. For example, Siamese cats usually have blue eyes, but in this case, the white color is caused by a different gene.

So if a cat is of Siamese origins, it may be white and have blue eyes, but if blue eyes are the result of kinship with a Siamese, then a hearing will have no problem.

Even in pedigree cats, it is difficult to establish with certainty the origins of the cat, and few breeders can guarantee that a cat does not have Siamese origins.

To complicate matters a little more, there is yet another gene that causes blue eyes, which is inherited completely separately from the color of the hair.

So, to sum up the matter, only some white cats with blue eyes are deaf, not all of them.

Other reasons why cats are white

To make matters more complicated, cats may be white for other reasons than the presence of the “mask” gene. There could be the complete absence of any pigmentation, which would make the cat albino.

It is usually easy to distinguish an albino cat from a white cat because albino cats usually have pink eyes and are very sensitive to light. But not all albino cats are different from blue-eyed cats with the “mask” gene. And albino cats are not deaf, because the cochlea develops normally.

On top of that, some cats are not white because they have the ‘mask’ gene. In fact, some have a gene responsible for white spots, spots that sometimes completely cover the cat which consequently appears white… But obviously, it’s genetically different. However, if this type of cat has blue eyes and is deaf, the reasons are not completely clear.

What are the chances of a white cat being deaf?

Obviously, a potential owner wants to know the chances of their white cat being deaf. Well, opinions vary, and so do the results of research conducted.

For those cats with other colored eyes, only 10-20% are deaf. And obviously, some cats of other colors are deaf for completely different reasons.

How do you tell if a white cat is deaf?

If you suspect that your white – or any other color – cat is deaf, you probably need to do some testing to see if it really is. A simple test named BAER is used to test for deafness in cats, and there are several places it can be done – just ask your vet.

White cat breeders usually test all of their cats to determine if they are deaf or not – or at least they should.

You can also try clapping or whistling loudly to see if the cat hears you. However, it can be difficult to determine with certainty.

If your white cat is deaf, don’t despair. Deaf cats can lead perfectly normal lives. However, it would be best to keep them indoors, as they may not hear traffic noises or other impending dangers. And obviously, a deaf cat will not answer the owner if they ask It to come, but in the end, almost all cats do! But a deaf cat, however, can have a beautiful and happy life despite everything. 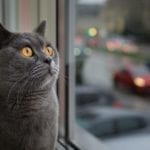