There is a lot of confusion around the  Black German Shepherd. Many think It’s a Mix-breed or a Belgian shepherd.

There are even those who think that the color of the black and tan coat affects the character and makes this dog particularly aggressive: but all this is absolutely unfounded.

These are urban legends that, below, we will immediately dispel, helping you better understand this animal through information and curiosities that not everyone knows.

There are numerous chromatic variations that influence the choice of a German Shepherd and that are recognized by the breed standard since the last century: they range from black and tan (certainly the most popular and widespread around the world), to gray (less widespread).

However, with the passage of time, many color variations of this specimen are slowly disappearing and, currently, most German Shepherds have a  black and tan coat.

The all-black German Shepherd is therefore becoming increasingly rare and it is also, for this reason, that information about it is scarce.

Types And Colors Of Fur In German Shepherds

As with many other breeds, German Shepherds come in a variety of fur types and colors. However, some coat colors are considered non-standard by larger breeders’ associations.

German Shepherds are considered intelligent and fearless, and their devotion, fearlessness, and intelligence are unmatched. This makes them one of the most sought after breeds in the world.

Many aspiring owners prefer a beautiful coat and a unique color for their dog. But when choosing a puppy one should know what coat color is accepted by the major breeders’ associations and which ones meet dog breed standards.

Some liver, blue, and all-liver colored dogs are usually accepted as an all-breed dog. However, purely white, solid blue, and spotted dogs are generally not considered purebred.

While the dog’s coat color doesn’t affect its character, health, or fitness, it is important to know what colors are acceptable if you plan to have your puppies attend dog shows.

Below are colors that are generally accepted by large associations.

The most common color combinations are:

There are four main types of sable color combinations that are common in this breed. Sable is an overlay of black fur. Based on their pattern and darkness, we can divide them into four categories.

While gray and black or brown colors are common and accepted for dog shows, there is also the rarer solid gray, which is not accepted by many large associations and may not be considered standard.

While some blue specimens are accepted as a pure breed, almost all large associations generally classify blue as non-standard, i.e. show quality.

The color of the liver is controversial: those with a light liver color and white (cream) shades may be accepted for an exhibition, while a darker liver color or red-colored ones are not considered standard.

Compare the second dog in the picture below: this corresponds to the standard and should be accepted, but the first one is not.

Panda sheepdogs are often mistakenly considered a cross between white and other colored sheepdogs. However, this is not entirely true. Panda Sheepdogs are the result of “Piebald staining” in a single bloodline and a spontaneous mutation; they are not related to the German Shepherd Dog.

They are 30-40% white, while the rest of the coloring is black and light brown. Physique, behavior, and traits are similar to German Shepherds, but many breeders claim that they are comparatively smaller than German Shepherds and that they only have short or medium-thick fur.

Some associations allow them to take part in shows as panda sheepdogs, but there are other associations that do not recognize them as pure pedigree dogs.

What does it have in common and what are the differences between this less common animal compared to the more popular one? Surely this type and the standard one both have a  muscular and robust build.

The males can reach, in adulthood, to weigh 90 pounds and to be about 2 feet tall, while the females weigh between 44 and 70 pounds and are1.5 to 2 feet tall.

As for the differences, on the other hand, in addition to the strong uniform black color that distinguishes this dog from the more widespread one, in the German Shepherd, the fur along the length of the coat should be slightly longer until it forms a soft mane around the neck, at the ears. and hips.

The all-black German Shepherd puppy unlike the others, who do not have a defined shade until 8-9 weeks of life, is born with a coat of this color that will characterize it forever.

In any case, it is always important to rely on a reliable black German shepherd kennel that will help you in recognition.

The expert breeder, in fact, knows in depth the genealogy of the puppy and, therefore, the bloodlines of the parents, thanks to a careful study of numerous and different aspects. They will also proudly show you where they’ve raised the puppies and, last but not least, they will give you all the information and documentations to ensure that your puppy is always healthy

Character Of The Black German Shepherd

Colors in our lives always have very important meanings and often they transmit psychological and emotional effects on us.

In particular, in the psychology of colors, black is associated with darkness, malice, and menace. In fact, many people tend to believe that animals of black color tend to be aggressive.

However, this is a very unfounded fear. Suffice it to say that Black German Shepherds are so docile and obedient to their owners that they are often used as guides for disabled people. They also prove to be extremely protective: it’s no coincidence that, in addition to being used as police dogs, in the farming world they are used to guard livestock and flocks.

If their owners find themselves in a situation of danger or are attacked by someone, they will immediately rush to protect them.

It’s however important to make the animal understand, at a young age, that not all strangers can be of danger: therefore it’s important to socialize it with both people and other animals.

Education and nutrition of a black German Shepherd puppy

Like any German Shepherd puppy, even the all-black one has a very playful temperament from the first weeks of life.

In any case, in addition to being important to socialize with dogs of all sizes and people of all ages, it is essential to give the dog a correct education, so that it grows with a balanced temperament.

Usually, the training starts from 8-9 weeks of life, teaching the puppy the most basic commands and to have a non-aggressive relationship with food.

We advise you to always contact an expert breeder who can give you some tips and teach you some basic commands for the education of your puppy.

If well behaved, a Black German Shepherd can make a perfect guard or companion animal.

As for nutrition, it is important to remember that only after weaning is it possible to feed your puppy. The energy requirement, clearly, is higher than an adult dog: a puppy weighing 30 pounds will need about 1800 Kcal per day.

In order to avoid drastic changes in nutrition, we recommend, at least for the first few weeks, to continue with the diet administered by the breeder.

Then you can feed your black German Shepherd puppy with dry treats  (preferably medium-high range), to which it is always advisable to integrate moist foods, such as chopped meat and eggs.

Remember, however, to always ask your veterinarian for the best nutrition.

How Much Does a Black German Shepherd Cost

The black German shepherd, being rarer than the standard one, can have a higher cost. Generally, the price of a puppy can vary from 1,500 Dollars up to 2,000 Dollars.

Always rely on an authorized kennel that has a lot of experience and knowledge of the breed.

Although the price of a black German Shepherd puppy imposed by a professional breeder may be particularly high, it is certainly an excellent investment.

You will not run the risk that the specimen may show ailments or diseases from the first years of life.

Taking a puppy from a professional breeder, in addition to giving you the guarantee of buying a quality specimen, is the ideal solution to be sure that the animal is healthy.

The breeder, in fact, knowing every aspect of the animal’s DNA, will ensure that the black German Shepherd puppy is free from the most common diseases of this breed, namely hip and elbow dysplasia. 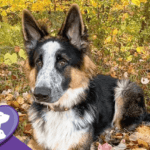