The Caucasian Shepherd Dog is a rustic and massive dog, but of harmonious construction. There are three types: “mountain” (mane, long outer coat, bushy paws, and tail), “steppe” (thick fur, but without mane or fringes, more slender body), and intermediate.

It is devoted to Its master and Its family. It does not particularly appreciate strangers and will therefore be protective of Its owner. An ideal companion dog once educated, the Caucasian Shepherd Dog needs spaces to feel in harmony. It’s not a great sportsman, but urban life hardly suits him.

A descendant of the ancient Caucasian dogs, the Caucasian Shepherd was traditionally employed by Russians and residents of surrounding areas to guide and protect their flocks. It was also responsible for guarding around their homes and protecting their families.

Its physical strength, endurance, and ability to withstand difficult climactic conditions quickly enabled It to establish Itself in this dual role. The selection of the breed began in the former USSR at the 1920s. The breed standard was established in 1985.

The Caucasian Shepherd is a dog with a balanced character, specifically cut for guard and defense. It’s endowed with great courage and exceptional responsiveness, in addition to Its dissuasive stature.

All these qualities associated with Its infallible attachment to his master make the Caucasian Shepherd a born protector. It’s nonetheless a calm and pleasant pet if it has received a good education. It’s loyal, calm, and very measured. It’s often alert and on the lookout.

Its calm temperament hides impressive defensive and offensive abilities. If It has no other choice, the Caucasian Shepherd can make use of Its powerful bite, even if It prefers mostly to kick
Its paws during clashes. Therefore, this type of dog must be educated in a balanced and firm manner from an early age.

Rather, it is intended for an active and experienced master. It is not necessarily recommended for neophytes. socializing it remains paramount to lower its level of distrust. Thus, it should be exposed to different environments and to different people and animals

The Caucasian Shepherd is made to live in rural or mountainous areas and much less in cities. It’s happier in the midst of large open expanses which give It the possibility of evolving freely and observing Its environment.

Apartment life is not ideal for this large dog. A house with a large fenced garden would suit him better.

The Caucasian Shepherd is a dog that does not present specific health problems specific to the breed. In addition, its fur and its origins give it impeccable robustness in terms of temperature variations, which it easily supports.

The life expectancy of a Caucasian Shepherd Dog is, on average, between 10 years and 11 years.

Those with a  long coat will need to be brushed several times a week to prevent the formation of knots.

It is recommended to brush the dog at least every week, especially during the molts. The oral hygiene of the Caucasian Shepherd Dog is important. Do not hesitate to brush the teeth of this canine regularly to avoid any deposit of tartar. In addition, monitoring is required at the level of the ears and eyes. Cleaning should be done quite often. 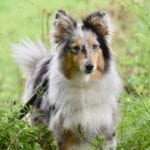 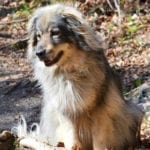