The Central Asian Shepherd is a large dog with a massive appearance, harmoniously built and with well-developed musculature, although not protruding. Males are larger than females.

They also have a larger head and a more pronounced withers.

The Central Asian Shepherd breed is very old, being the result of more than 4 millennia of natural selections. The harsh climatic conditions of Its original habitat and the nature of the predators it had to contend with shaped Its build and personality, making It resilient and determined.

Qualities that have earned it to be raised by many nomadic tribes of Central Asia over a very large territory, stretching from the Caspian Sea to China and from the Southern Urals to Afghanistan.

It has always been used for the protection of the cattle, the caravan, and the house of its master. The Dog was definitively recognized by the Fédération Cynologique Internationale (FCI) on January 25, 1989.

The Central Asian Shepherd is a dog full of confidence, pride, and courage. Although It’s calm and balanced most of the time, It does not lack tenacity when called upon to protect. Traditionally bred to watch over the herds, It’s determined to face the predators who covet It.

Its innate sense of territory and Its natural distrust of strangers also make It an excellent watchdog.

The Central Asian Shepherd is known for its biting, its natural aggressiveness should not be exacerbated by a violent upbringing. Rather, it should be both soft and firm. The dog should be socialized as early as possible in order to get It used to being around a variety of species (humans, other dogs, cats, etc.).

The Central Asian Shepherd is not a house dog, due to its size and characteristics. It needs space to be happy. It can adapt to city life if it is walked for a long time and frequently.

It is addressed to a teacher who knows how to show firmness while being fair and available.

The Central Asian Shepherd is a rustic, robust, and resistant dog. Thanks to its naturally strong construction and double-pile, it does not fear extreme cold or bad weather.

The Central Asian Shepherd does not require extensive maintenance. It only asks for basic care, which must however be provided on a regular basis.

It is recommended to brush the dog once or twice a week for the maintenance of Its coat. During the moult, it’s to be brushed every day. 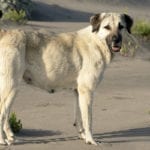