The Dogo Argentino is a magnificent dog with Its white coat and Its proud and confident appearance. Formerly used to fight bulls and hunt wild boars or even pumas.

A hunting dog, it’s above all a great life companion for families. It’s gentle, affectionate, requires tenderness and presence. It’s faithful, loyal, and above all little barker. It’s an excellent protection dog. In addition, It does not require any particular maintenance, except to be often at Its side, because It does not support loneliness.

The Dogo Argentino comes straight from the region of Cordoba, Argentina. Thanks to doctor  Antonio Nores Martinez that this breed of dog was born. He was a surgeon in the first half of the 20th century.

He decided to cross a former Cordoba fighting dog (perro de pelea cordobès), which Itself came from a cross between Mastiffs, Bulldogs, and Bull Terriers. The dogs used for breeding were all completely white.

This drastic and precise selection allowed the doctor to create different lines. Thus, the Cordoba fighting dog was itself crossed with a German mastiff to sublimate the head, a Bordeaux mastiff, a Pointer, and a Boxer.

The Argentinian Mastiff standard was established in 1928. At first, it was used as a fighting dog. The doctor was convinced that it could be used during hunting parties. So in 1947, he took his best dogo to the Buenos Aires Hunters Club for a demonstration. A fine sense of smell, impressive muscles, and very good endurance convinced the most skeptics.

It arrived in Europe in the 1970s, first in Italy and then in France, where it became very popular. The  Fédération Cynologique Internationale recognized the breed on July 31,1973.

The Argentinian Mastiff is endowed with an extremely rare psychological balance. It’s very smart. It’s very faithful and loyal to Its master whom It will defend from all possible dangers. It’s calm and not very barking.

It’s perfect for a family with children if it was used to being around them in Its youth. It will thus be a  perfect playmate. It’s courageous, pugnacious and will always be on the alert.

Thus, It’s excellent in the role of a protective dog. It’s endearing and needs tenderness and attention to be fulfilled. It loves the presence of other animals. It has a tendency to want to dominate Its fellows.

Be careful, Its imposing physique and the power of Its bite can make It a dangerous dog if placed in the wrong hands. It’s an excellent guard and defense dog.

Perfectly adapted to family life, the Argentinian Mastiff needs a careful and strict education. It easily complies with the rules imposed on It. They must be coherent and instilled with firmness, but not brutality.

It’s not recommended to stimulate Its aggressiveness. On the contrary, you have to curb Its enthusiasm. It may be more distant with strangers. As long as it has been socialized from an early age, it cohabits more easily with other animals.

The Dogo Argentino Puppies tend to be shy when they arrive in their new family. It’s important to make It social as soon as possible, especially with children. It must learn to play with them and feel their presence. The Dogo is a hound and, therefore, It can be stubborn.

It must feel completely safe in order to follow Its master’s orders to the letter. Getting help from a professional at a dog club can be a great idea in order to avoid making mistakes and to ensure good training.

The Dogo Argentino adapts very easily to its environment, but it cannot live in an urban environment without a large garden and very frequent outings. It supports loneliness if It has been used to it, even if it’s contrary to Its temperament.

It needs a lot of physical activity. It lives as calmly in a house as It does outside, except during winter when it tends to get cold and snowy, providing it with a warm shelter is a must. The apartment living is not necessarily recommended unless it can be released several times a day.

The Argentine Mastiff is a rustic dog, rigorously selected and which is the subject of numerous crosses to avoid inbreeding. The puppy should be watched carefully until adulthood to prevent possible developmental problems. Adapted to harsh conditions, hardy, and blessed with excellent genetic diversity, this breed presents few health problems.

As in other breeds of dogs, the white color is due to a gene responsible for a predisposition to deafness, neither rare nor frequent, normally detected from the age of 3 months (check with the breeder). Finally, because of fairly fine hair, too long exposure to a scorching sun can cause it to heat up.

The life expectancy of an Argentinian Mastiff is, on average, between 12 years and 14 years.

Its maintenance is very easy. It is an outdoor dog that has few needs, apart from a demanding food intake during growth. Its energetic and playful temperament is then coupled with an exceptional muscular development.

Weekly brushing is enough, possibly a bath every 4 to 6 months. The length of the coat may vary depending on the climate. In temperate zones, it is longer, with a possible undercoat which requires more frequent brushing.

The diet of the Argentinian Dogo should be carefully monitored, especially at the beginning of Its life. It grows quickly and must have a  diet adapted to Its morphological change. Indeed, a poor diet has repercussions on the Dogo’s articular or muscular problems.

Kibble especially appropriate to the weight of Dogo can be found in specialty stores. Do not hesitate to ask for advice on the ratios to feed It. 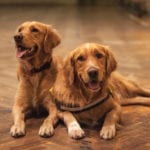