The Bergamo Shepherd is an almost perfect dog for families, whether large or small. It forms a close relationship with Its master, in whom it shows itself to be faithful and loyal. It loves the great outdoors and needs It to run and exercise.

In addition to an excellent character and a very easy upbringing, It’s endowed with iron health, without any disease to be deplored.

The Bergamo Shepherd is a very ancient breed since this dog was already used by shepherds in Roman times. Originally from the Bergamasque Alpine regions, specializing in the care and management of flocks of sheep, It has also distinguished Itself as a family dog. The breed almost died out after WWII, but an enthusiast, Dr. Maria Andreoli, has largely contributed to saving it by maintaining a quality breeding.

Today the Bergamo Shepherd is highly regarded as a companion, guard, therapy, and mountain rescue dog. However, it remains relatively unknown outside of Italy. The breed was definitively recognized by the Fédération Cynologique Internationale (FCI) on February 23, 1956.

The Bergamo Shepherd is an intelligent, determined, and vigilant dog while displaying a level-headed and patient personality. Never fearful or aggressive, It possesses all the qualities that have allowed It to shine in Its favorite field: driving and herding herds.

As a family, It’s a pleasant companion for everyone, especially children.

It shows attachment to Its master and courageously watches over Its house. The Bergamo Shepherd can also be stubborn from time to time. It can be shy, and It’s never aggressive or fearful.

Despite Its small, strong head, the Bergamo Shepherd demonstrates a remarkable capacity for learning which facilitates Its education. It must be precocious, just like its socialization, and this, in order to temper its character.

The Bergamo Shepherd is not very difficult to train. You have to be firm,  strict but also gentle to not offend its sensitivity. It has great learning abilities. It’s  determined  to succeed and to please Its master

The Bergamo Shepherd is primarily an outdoor dog and large spaces. It will be difficult for It to get used to a city lifestyle, especially in an apartment, if It’s not sufficiently stimulated through long and frequent outings.

It must then be constantly in the presence of Its master. What pleases It are the large expanses it can find in the mountains or in the countryside. It must be able to frolic, exercise, and breathe fresh air.

The Bergamo Shepherd is a robust dog, which tolerates the cold remarkably well and does not suffer from any pathology specific to the breed. In addition, due to its origin and its very long coat, it supports the cold wonderfully.

The life expectancy of a Bergamo Shepherd is, on average, between 13 years and 15 years.

The Bergamo Shepherd is not affected by seasonal shedding, but its coat is constantly growing. Despite the coarse and abundant appearance of his coat, he is a dog that requires little maintenance.

This dog is neither to brush nor to groom. It just needs to be washed from time to time and dried slowly in the sun. No regular brushing must accompany the life of the Bergamasco Shepherd. It will be possible to check the condition of its ears or Its eyes, but simply for the form because It’s not subject to any infection. 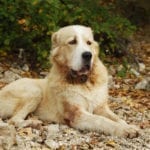