The Borzoi, or Russian Greyhound, has 2 very distinct characters.

It is a calm dog, observant in the family. When hunting, its slightly crazy temperament will take over.

It becomes untenable, lively, alert, and a very good runner.

Its peaks can exceed 55 km/h. The Borzoi has an atypical and majestic physique.

It’s not necessarily the ideal companion for children, with whom it will hardly ever play.

On the other hand, It’s very attentive to Its owner, provided It’s treated with respect.

Borzoi is not necessarily comfortable around strangers and other animals.

It is therefore necessary to socialize it from an early age.

The Borzoi, or Russian Greyhound, has 2 very distinct characters. It is a calm dog, observant in the family. When hunting, its slightly crazy temperament will take over. It becomes untenable, lively, alert, and a very good runner. Its peaks can exceed 55 km/h. The Borzoi has an atypical and majestic physique

Opinions differ on the crosses that allowed its appearance in Russia.

Some think that it would be the result of the meeting between Asiatic Greyhounds of the Sloughi or Tazi type and the Laïka, a famous Russian dog of the spitz-type, specializing in draft and hunting.

Others believe that it is the Persian Greyhound Saluki crossed with Russian sheepdogs which is at the origin of this breed.

What is certain is that Borzoi has accompanied Russian culture for almost a millennium! Indeed, in the French chronicles of the 11th century, we find an allusion to three Borzoi who accompanied the wedding procession of Anna, the daughter of the Grand Duke of Kiev when she arrived in Paris to marry King Henry I.

In Russia, the Borzoi was specialized in hunting wolves, boars, or fast game such as deer or hares. In their time, the Tsars Ivan the Terrible, Peter the Great, and Nicholas II and the writers Pushkin and Turgenev had boundless affection and admiration for It.

The Borzoi is a very calm, balanced, sensitive, and pleasant dog.

When hunting, as soon as It sees the game, It totally transforms: it becomes excited, impetuous, and totally determined.

Its eyesight is remarkably efficient. it can sometimes be stubborn and not very interested in children.

The Borzoi shows all the qualities of a good companion dog almost exclusively with its master. Outside of hunting parties, its calm, serious.

Due to Its strong-headed side, the Borzoi must be educated firmly from an early age.

It is not about “breaking” it either. Its education should also include gentleness, as Its particularly sensitive, like most greyhounds.

The learning of the recall is also critical because a Borzoi running at full speed on a track can move away in no time.

Built for work and running, the Borzoi needs a master available and able to offer it regular physical activity.

Even if Its discreet with its family and likes to spend time in the greatest tranquility, it will always prefer to enjoy large open spaces.

Living in a house with a fenced garden is, therefore, more suitable for it than living in the city in an apartment.

The Borzoi is a  robust healthy dog. However, it sometimes suffers from digestive problems.

It, therefore, needs quality food. In addition,  hip dysplasia is a common pathology in this great athlete.

Relatively early screening is recommended in order to limit the development of osteoarthritis.

Finally, like all Greyhounds, the Borzoi is prone to eye conditions, including  Borzoi retinopathy

The life expectancy of a Borzoi is, on average, between 10 years and 12 years.

The Borzoi is subject to an annual moult giving rise to fairly significant hair loss.

Regular brushing of Its dress is essential to maintaining its natural beauty and elegance, as is its cleanliness.

Its ears should also be inspected frequently to prevent debris deposits and infection.

It is recommended to brush the dog 2-3 times a week. During the moult, brushing becomes daily. 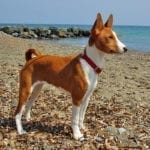