A medium-sized dog, the Boxer nevertheless remains a robust dog with a powerful frame. The general appearance is neither heavy nor clumsy. The Boxer is a dog that rarely lives more than 10 years.

It’s a perfect dog for children, with whom It will play without stopping. It loves to be cuddled. Gentle, docile, and intelligent, the Boxer sits up with ease, although professional help is recommended.

The Boxer is the result of a genetic cross between two species. From the 19th century, we were able to witness the birth of a new crossed species between the English Bulldog and the Brabant Bull Dog, or “Bullenbeisser”.

The Boxer comes from Germany where it was presented for the first time in Munich in 1895 and where its success was immediate. A descendant of a breed of dog called the Bullenbeisser which was used for hunting, the Boxer is one of the most popular Molossoids today.

The Boxer is a playful dog, but can also be a guardian. A bit brusque by nature, this breed of dog can also be gentle and adapted to family life. Capable of a lot of complicity with Its master, It will nevertheless require an effort concerning Its education.

If one wants to obtain correct behavior on a daily basis, it is advisable to ideally choose a puppy and to educate it from the beginning. the  Boxer is not necessarily easy to train for someone who has never had to deal with such a breed, the Boxer can however reveal all Its abilities in the hands of an expert behaviorist.

The animal naturally fulfills the functions of guardian, especially with children. A balanced and adapted education above all will be the key to success.

The Boxer is an outdoor dog who can sleep in a suitable shelter during the winter, but It will certainly prefer to live with Its masters inside the house, due to Its sociable character. In a house, the male tends to drool a little, the female a bit less.

However, It must avoid areas that are too hot,  as excessively high temperatures can cause serious respiratory problems.

The Boxer’s life expectancy is 10 years on average. The short muzzle of the species possibly poses respiratory problems, especially in cases of excessive heat. It’s therefore advisable never to leave the animal in direct sunlight when it is hot.

Like all medium to large-sized dogs, the Boxer can be prone to heart problems and can suffer from hip dysplasia as well.

During Its life, It may also have hip dysplasia, as an aortic stenosis. Lastly, this breed of dog can experience some stomach twists. It is therefore important to ensure that It remains calm before and after each meal.

The life expectancy of a Boxer is, on average, between 10 years and 12 years.

The animal loses its hair but it is possible to reduce this loss by brushing the animal at least twice a week, for example using a rubber glove. To make it shine, it is recommended to apply a chamois after grooming.

The Boxer does not require special maintenance. Remember to brush and wash it from time to time, if necessary with a nourishing shampoo once or twice a year. Do not hesitate to take It out every day as much as possible, because the  Boxer is an animal that needs exercise.

Finally, it is advisable to check the condition of  Its eyes and ears from time to time.

Before Its 4 months, the Boxer must eat 4 meals a day to support its development. Afterward, Its daily ratio can be divided into 2 (morning and evening). It’s satisfied with a diet based on high-quality kibble. 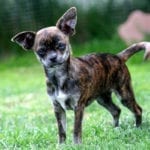