The Berger de Brie, or Briard, is a large, rustic dog, robust and muscular. Powerful and imposing, it is nonetheless endowed with remarkable flexibility and harmonious proportions. Its long, thick coat, slightly wavy and with hair masking the eyes is a characteristic trait of the breed.

Formerly called the French Shepherd Dog of the Plain, the Berger de Brie did not begin to receive its present denomination until the beginning of the end of the 18th century. It seems that the Berger de Brie is the result of crosses between old breeds of sheepdogs and the Barbet . It quickly asserted Its ease in the tasks of driving, guarding, and protecting herds.

It was then employed in the French army in the interwar period. Today, the Berger de Brie continues to lend a hand to shepherds, but it is also used as a companion dog thanks to its balanced temperament. The Berger de Brie breed was definitively recognized by the FCI on December 14, 1954. Its current standard was published on November 4, 2008.

The Briard is a dog as imposing as it is calm. Its balanced temperament and softness make it an excellent companion at home, especially with children. Loyal and protective, It’s not aggressive without being fearful. All this, combined with Its natural distrust of strangers (Its long past as a sheepdog obliges It), gives It the status of an excellent guard dog. The Berger de Brie is also a dog with a strong personality.

Able to be somewhat stubborn, the Briard must be firmly educated in such a way as to quickly point out the limits not to be exceeded. It must also be properly socialized to prevent unwanted behavior towards its congeners, other animals, and people.

The intelligence of Berger de Brie and  Its loyalty greatly facilitate Its education.

Even if the Briard is a rather calm and balanced dog, it’s not made to live in a small space. It’s about a large sheepdog who needs a living environment in line with its specificities: a house with a large fenced garden, ideally.

It must remain active, which predestines It to a fairly athletic and available master.

The Berger de Brie is a rustic, robust dog, which does not fear the cold and bad weather. However, it should be noted that the breed is one of those predisposed to certain ailments: torsion and dilation of the stomach, hip dysplasia, or even night blindness (reduced visual capacities in low light).

The life expectancy of a Berger de Brie is, on average, between 10 years and 12 years.

In general, the Berger de Brie does not moult . This is a rustic dog that does not require extensive maintenance, but its coat must be regularly groomed due to the length of its hair.

It is recommended to brush the dog once or twice a week, at a rate of about thirty minutes per session to prevent the hairs from tangling and to keep them clean. On the other hand, it is not recommended to wash it frequently to not alter the rustic character of its coat. 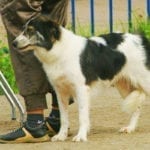