Medium in size, agile and intelligent, It fits in perfectly with family life and adapts to a variety of living environments, as long as you don’t let It get bored.

Contrary to what its name implies, the Australian Shepherd is not originally from Australia. This dog was not developed in Australia but in the United States. Rather, it was American farmers who developed the breed in the 1900s in order to have a dog capable of herding cattle.

Even if many theories contradict each other, the true origin of this breed would be Basque. In fact, the ancestors of the Australian Shepherd were dogs of Basque origin imported to North America, then Australia.

In the 19th century, in the Pyrenees region between France and Spain, many (especially pastors) would have had to move and leave the area for lack of work.

Some would have gone to Australia at the time when the country was becoming a major producer of wool.

These pastors had dogs very similar to the Australian Shepherd and their skills were highly appreciated for herding. They would then have taken the road to the United States.

On the other side of the Atlantic, the Australian Shepherd saw its popularity increase after World War II. It has therefore flaunted Its versatility and intelligence to cattle breeders on the ranches.

Today,  It continues to accompany shepherds and farmers, the Australian Shepherd is also an excellent companion for the whole family.

This breed is made for action although it is not quarrelsome by nature. The Australian Shepherd is rather facetious and curious. Instinctively, It’s quite capable of leading or keeping a herd. Not very fragile, it easily endures long days.

It has no trouble adjusting to family life as long as It can get busy. The Australian Shepherd is a dog of remarkable intelligence.

It’s also appreciated for Its loyalty, energetic side, and balanced temperament. A very pleasant companion for the whole family, It’s a little more reserved with people It does not know.

At work, the Australian Shepherd demonstrates Its versatility, Its enthusiasm, Its agility, and Its insight.

Qualities that allow It to effectively lead the herds entrusted to It and to adapt to a variety of tasks.

It can start at the age of 2 months if we want to properly discipline him to make a pet.

On the other hand, it is very important to offer It an education that is at the same time firm but without violence.

Brutality is unbearable for It, the Australian Shepherd is educated by betting on rewards and encouragement. Its permanent activity and Its strong character require good socialization.

It is also recommended to share a canine activity with him (agility, canicross, etc.) to ensure his development.

The Australian Shepherd is not really cut out for apartment living. It prefers houses with gardens to give free rein to Its sporting temperament.

It is a breed that appreciates company and demands affection as much as action.

We must therefore remember to take it out often enough and avoid leaving it alone for too long. If It needs authority, it should be conveyed to It gently.

Rather resistant to bad weather thanks to its double coat, the Australian Shepherd must however benefit from a shelter protecting it from difficult climatic conditions.

Among these eye diseases, it is important to perform an annual screening test for progressive retinal atrophy (PRA), collie eye anomaly (AOC) and juvenile cataracts.

In addition, It’s prone to hip and elbow dysplasia and epilepsy. Skin diseases have also been noted in several individuals.

You should also be concerned about possible cases of epilepsy and hip dysplasias. Regarding deworming, it is recommended to do it 3 times a year.

Attention, ivermectin (a substance present in some dewormers) represents a real poison for the Australian Shepherd.

The life expectancy of an Australian Shepherd is, on average, between 12 years and 15 years.

The Australian Shepherd requires some attention. Of deworming every 4 months are recommended in addition to a valid vaccination.

Its nails should be cut regularly to rule out any risk of cracking.

The ears also need to be cleaned frequently to prevent wax from building up and the teeth should be brushed to stop tartar build-up.

The Australian Shepherd moults twice a year, usually in spring and autumn. It can then lose a lot of hair.

For the rest, maintenance remains basic, based on regular brushing.

Its self-cleaning coat, however, only requires one bath per year, it is recommended to use a dog shampoo to prevent dryness of the coat and skin.

The Australian Shepherd is subject to 2 moults per year that of spring is stronger. During these shedding periods, regular brushing is essential to avoid knots and to get rid of the large volume of dead hair.

It is advisable to use a brush with flexible pins (iron or plastic), also called a “slicker”, to free Its hair from plant debris after a walk for example. Its thick fur coat adapts perfectly to this type of brush. 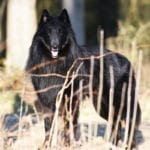