The Austrian Black and Tan Hound is a very popular hunting dog in Austria. It’s a courageous and brave all-around hound who never balks at work. Little known in the united states and elsewhere. It is mainly used for fox and hare hunting, but also for blood research which is its specialty.  This breed of dogs is often mistaken for the Tyrolean Hound

We know very little about the origins of this Austrian Black and Tan Hound, because they are quite nebulous. Nevertheless, the Austrians say It would descend from the Celtic hound. The race which has totally disappeared today.

Not being subjected to any real regulation, it is difficult to know the crossings which could be made in this race. We are not even sure that the origins are Austrian, before the 19th century, breeding was absolutely not regulated.

The breed of the Austrian black and tan Brachet was definitively recognized by the Federation Cynologique Internationale (FCI) on September 3, 1954. Its official FCI standard in force was published on October 10, 1995.

The Austrian Black and Tan Hound is a medium-sized hound and research dog. Solid build, the black, and tan Austrian hound is characterized by an elongated silhouette giving an impression of great flexibility. The color of Its dress is reminiscent of those of the Doberman, the Rottweiler , the Pinscher, the Beauceron, or the Setter Gordon.

The Austrian Black and Tan Hound is a dog with a pleasant temperament. It’s lively, attentive, reserved, but attached to Its master. When hunting, It shows remarkable determination and assurance when following prey (especially hare), relying on Its extremely fine flair.

Note: the Austrian hound can quite live with children. It’s patient and playful, which could easily bring joy to a child. In spite of everything, rules of caution will have to be put in place, for the safety and tranquility of the whole family.

Rules such as letting the dog sleep peacefully in Its basket, not taking Its toys away, and not forcing It to be petted, will help the dog to feel comfortable and belong. Likewise, the dog must not be left alone with the child, or even have access to its room without supervision.

Note: as with all breeds of dog, cohabitation with other animals such as cats, horses, and other species is completely possible, as long as it is educated and socialized from an early age. Despite everything, it has a strong instinct that we must take into consideration, especially if we want It to be around small animals such as rabbits or a gerbil.

The Austrian Hound requires a firm and precocious education. It will be necessary to be careful not to reinforce its reserved character. It should be introduced to outdoor life as early as possible so that It’s not afraid of anything. Education-based on rewards and games will suit It wonderfully. It will be easily educated if the teacher remains consistent and fair.

The Austrian hound can live in an apartment, even if it is known to like the great outdoors and revel in the great outdoors. Despite everything, living in an apartment is possible, because it is provided that all of its needs are met on a daily basis. Essential needs such as daily walks outside, games, congeners, and human contacts every week, will allow It to be well in Its paws. Watch out for destruction in the house, if It’s bored!

The Austrian Hound is a healthy and robust dog. There is no particular predisposition to any disease in this breed. Most of this dog’s health problems essentially correspond to incidents occurring during the hunt: injuries, heatstroke, etc. In addition, the inside of Its hanging ears should be watched closely to prevent infections and ear infections.

The maintenance of the Austrian black and tan hound is not particularly restrictive. Its short coat is fairly easy to care for, but it must be done on a regular basis to maintain its cleanliness and characteristic silky appearance. The hair loss is moderate, but it is regular. It may therefore be found frequently on soils.

Going out
The black and tan Austrian hound needs a lot of exercise to get active. Developed for hunting, this breed must indeed be able to evolve freely over large spaces. Simple and short walks cannot therefore satisfy It in this respect. Rather, it is recommended to take it out at least twice a day and over long distances.

Hygiene
The brushing of the Austrian black and tan Brachet is to perform 1 to 2 times a week to remove dead hair and make it shiny coat. 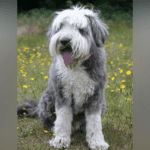