The Barbet is a breed of dog that loves water more than anything. Thus, swamps or ponds are Its favorite playgrounds. Another love: its owner.

The Barbet is an excellent, loyal companion dog. It is gentle, caring, and endearing. They don’t necessarily like solitude and find their fulfillment in the company of their owner.

Also an excellent playmate for the little ones. The Barbet is recognizable by its thick curly fleece and beard, hence the choice of the name of the breed.

The name Barbet comes from “bearded” and designates a water dog. Its origin is difficult to trace. Some believe that it is first seen in  North Africa.

Others believe that the Barbet appeared for the first time in  Central Europe. It is therefore a European dog, which may also have emerged in the  Middle East.

In 711, the Barbet arrived on the Iberian Peninsula following the crossing of the  Strait of Gibraltar by the  Arabs.

It continues its ascent and crosses the  Pyrenees to settle in  Languedoc and  Aquitaine. The Barbet then headed further east, towards  Bresse and the Alps, where Its water dog qualities are appreciated.

Much more recently, the breeder  Vincenti exploded the popularity of the Barbet between the 2 World Wars. Then, like many races, it was close to extinction during World War II.

It stayed alive thanks to the daughter of  Doctor Vincenti, who continues to breed the breed.

The Barbet is a dog with a balanced, sociable, and active character. Waterdog par excellence, It never hesitates to dive to retrieve waterfowl hidden among aquatic plants.

Within the family, It’s extremely attached to Its owners, is very affectionate, and gets along very well with children and other animals in the house. The Barbet is an intelligent and balanced dog.

It’s particularly docile. It’s loyal to Its owner, for whom It has a deep affection. Indeed, the Barbet is sometimes used in hospital and psychiatric environments, to help sick people to forge a link with the outside world again. It also appreciates the presence of other animals.

The education of the Barbet requires a  lot of patience, gentleness, and a small dose of firmness.

It likes to please Its master, which is a significant asset in Its learning.

It’s docile, but must be educated with reflection and methodology.

Like all dogs, the owner must show gentleness, empathy, and firmness.

The Barbet is a dog that is aimed at people willing to offer It long outings and frequent activities.

Its best suited in a house with a fenced garden than in an apartment, however, It can adapt to all  lifestyles if you take it for long daily walks and if Its needs are met.

The Barbet is a rustic and robust dog. Its particularly provided dress gives it excellent protection against the cold and especially humidity. The Barbet is not afraid of water (even cold),  it is very comfortable in this environment.

Hip dysplasia and patellar luxation are among the rare pathologies to watch for in this breed. Apart from that, it does not present a big health concern.

The life expectancy of a Barbet is, on average, between 13 years and 15 years.

The Barbet is one of the breeds that do not moult. As a result, its maintenance is considerably facilitated, but it must remain regular to preserve the natural beauty of its dress and effectively protect its skin.

It is recommended to brush it methodically once a week. It can be bathed occasionally using a specific shampoo.

As for grooming, it can be of the “hunting mowing” type if it is called upon to hunt regularly. You should also check Its eyes and ears regularly to avoid infection. 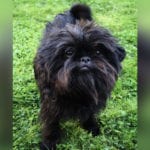