The Basenji is an adorable dog suitable for any type of family.

It blends wonderfully into any type of environment.

It does not require any maintenance because it is renowned for its great cleanliness. Its sociable, gentle, but also lively and athletic.

Its protective and caring. The perfect dog!

The Basenji is considered to be an aristocratic dog in Its appearance.

It is originally from the Congo and happens to be a very old breed.

Indeed, It descends from the greyhound of Egypt. We find its trace more than 5,000 years ago.

Like many races, the morphology of the Basenji adorns some tombs of pharaohs in ancient Egypt.

Then, the breed disappeared from the radar for a long time.

It reappeared in the 19th  century in the Ituri Forest, in Kasai-Oriental province in Congo.

Its discovery is the fruit of British explorers. They gave the name of Basenji to the Angari Ango.

A name that comes from “basénzi”, which means “wild” or even “primitive” and which were adjectives used by the colonists to designate the natives.

The first Basenji to be imported into Europe from the early 20th  century, in the mid-1930s It moved to France in 1966.

Conversely, it is very popular with families in England and the Nordic countries, especially thanks to its great friendliness.

The  Basenji is a balanced, lively, and intelligent dog.

It is quite independent and is wary of strangers, but It remains affectionate towards Its master and its family.

It is not a dog particularly known to like children.

It is better that the children grow up at the same time as the Dog.

This is to avoid misinterpretation of an inappropriate gesture by a child unfamiliar with dogs.

The first order to teach It is to recall. Otherwise, It will be inclined to favor its flair rather than listen to its master.

The Basenji is a remarkable dog who is not very difficult to train.

It needs a  strict education,  firm, but also filled with gentleness, otherwise, It could focus and withdraw into itself.

As with all dogs, it is enough to start very early.

The advantage of the  Basenji is its absence of barking, to which it prefers a small chuckle.

Its therefore not silent, but will not disturb the neighborhood if it lives in an apartment.

It’s also not against city life, provided It benefits from several daily outings.

Indeed, it is not made to remain exclusively inside a habitat.

Thus, it will be more comfortable in the countryside or in a house with a  garden.

A garden that It must avoid during winter and when the temperatures cool.

With longevity of 13 years, the Basenji has solid health, to which some diseases can nevertheless cling.

Thus, during Its lifetime, Its predisposed to develop  Fanconi syndrome, which is fatal genetic kidney disease.

Before any adoption, Its master will have to have the breeder tested.

In addition, because of Its size, It’s also more fragile at the hip, where It can be prone to dysplasia.

An inguinal hernia is also not excluded. Finally, It likes hot weather, it only moderately appreciates the winter cold.

It will therefore be necessary to cover it in the colder months.

The  Basenji is a very low maintenance dog that sheds very little hair.

It is known and appreciated for its remarkable cleanliness.

It has this manner of ensuring Its own toilet which is somewhat reminiscent of that of cats, of which It sometimes imitates the sitting posture.

This does not mean that it does not need to be maintained at all, which would put it at risk of infection and disease.

Despite its extreme cleanliness, it is recommended to brush the dog on a weekly basis to help it maintain the cleanliness of its coat. 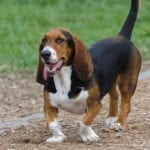