The Basset Artésien-Normand is initially a pack dog. An excellent hunter, Its the perfect dog in rabbit hunting parties. It exhibits the qualities of courage, stubbornness, and resourcefulness.

It’s intelligent, very lively and Its facial expressions make it an irresistible dog.

The Basset Artesian-Normand has become a real pet. It hates loneliness and will waste away quickly if It doesn’t have the necessary company.

It’s affectionate, gentle, cheerful, and appreciates the presence of children, with whom it will play until it no longer wants to.

Basset Artésien-Normand was born in the 1870s. It is the result of a cross between Basset de Normandie and Basset d’Artois, at the time of the first French Bassets.

The Count Jean-Emmanuel Le Coulteux Canteleu and Louis Lane are considered the creators of this breed.

The first focused on the creation of a utility dog ​​with straight forelegs (the Artois) while the second favored a dog with twisted forelegs (the Normand).

The name Basset Artesian-Norman came at the beginning of the 20 th century.

25 years after the creation of the first standard (1898), the breed was made official in 1924. Gradually, the breed was introduced in England and the United States

The Basset Artésien-Normand started out as a hunting dog.

It excels with game such as rabbit, roe deer, and hare.

It is also an excellent companion dog, which will satisfy all families. Thus, It wants to be treated in a gentle, affectionate, and cheerful manner.

It’s very obedient, docile even if It can sometimes be stubborn. Playful and lively, It knows how to take time with children and play with them. Charming, It’s always friendly and needs company

No hint of aggression emanates from the Basset Artésien-Normand. However, Its charming side can play tricks on you.

It’s therefore advisable to educate It with firmness and gentleness, from an early age.

It will prove to be docile thereafter, in addition to being attentive.

The Basset Artésien-Normand is a sporting dog. It likes to run and exercise. Thus, living in an apartment may suit It just as well, but on condition that It goes out for long enough walks on a daily base.

It needs to go outside regularly (a garden seems perfect).

It also enjoys running alongside Its master when jogging.

Basset Artesian-Normand does not develop any hereditary disease during its life. Nevertheless, it is advisable to watch its frame.

It has a predisposition to suffer from Its skeleton as time goes on. Thus, hernias, bone deformations, or even problems with the vertebrae, hip dysplasia can occur.

It should also be noted that its limbs, quite fragile, it doesn’t support rough trails.

Sometimes a bath is required when their coat is covered in mud or after a heavy downpour.

The moulting period should increase the frequency of brushing (once a day) even if the Basset does not lose a lot of hair.

In addition, it is advisable to monitor Its ears frequently to reduce the risk of ear infections. As with many dogs, Its eyes should also be cleaned from time to time.

The life expectancy of a Basset Artésien-Normand is, on average, between 12 years and 15 years. 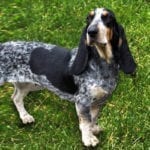