It needs to give and receive a lot of affection. It likes wide-open spaces, running, and exercising.

It is therefore mainly suitable for families with or without children, or young singles.

Seniors may find it difficult to meet Their expectations.

The Basset Fauve de Bretagne is a very old breed dog, whose presence is attested at least to the 16th century.

A descendant of the Griffon Fauve de Bretagne, It was on the verge of extinction at the end of World War II, but a passionate breeder, Mr. Marcel Paumbrun, helped to save the breed, incorporating contributions from the Basset Vendéen and the Wirehaired Dachshund.

Common and popular in Brittany in the 19th century, the Basset Fauve de Bretagne became known throughout France during the 1970s.

It’s playful, very docile, and above all  sociable. It will not hesitate to have fun with the youngest as well as with Its master, to whom he is totally devoted.

It’s balanced and calm. It’s never aggressive and will not pose any difficulty in the presence of congeners or strangers. It’s also jovial and very frank. It adapts very easily to its environment.

The Basset Fauve de Bretagne is very easy to educate a dog. Its hunter side nevertheless gives a  rather harsh character, which should be softened from an early age.

It’s docile and intelligent,  makes Its education rather simple, It knows how to handle firmness and gentleness.

The Basset Fauve de Bretagne seems to be totally incompatible with living in an apartment. It needs spaces to run, to exercise, and therefore to stay happy.

It will thrive in the countryside or in a house with a large garden. It should be taken out regularly to clear the mind and keep busy. Its well-being and development depend on it.

The Basset Fauve de Bretagne has solid health. It has no known hereditary pathology and does not seem to be predisposed to any disease.

In addition, it stands up very well to the most difficult conditions, namely heat and cold.

The life expectancy of a Basset Fauve de Bretagne is, on average, between 12 years and 14 years.

The Basset Fauve de Bretagne is a very easy dog to maintain. It does not require great efforts at this level, apart from regular brushing to preserve the cleanliness and beauty of its hard coat.

It is recommended to brush the dog once or twice a week, more during the moulting period. 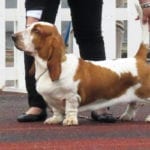