The Belgian Shepherd Malinois is an extraordinary dog ​​for protection, guard, and defense. It’s endearing, intelligent, lively, and shows a fabulous loyalty to his master.

It’s a player, is not difficult to educate, and has an advantage in terms of maintenance compared to Its Belgian cousins. In addition, Its solid health does not require any unnecessary expenses.

The Belgian Shepherd Malinois is particularly recognizable by its mask extending from the lips to the eyelids.

The Belgian Shepherd Laekenois was named in reference to the castle of Laeken. This dog was the favorite of Queen Marie-Henriette (1865-1902).

This is the oldest variety of Belgian Shepherd, but also the rarest. There are very few of them outside of Belgium and the Netherlands.

The Belgian Shepherd Laekenois is said to originate from Boom, in the province of Antwerp.

The Belgian Shepherd Laekenois is an intelligent dog, endowed with an innate sense of protection and defense. Extremely loyal and courageous, It’s always alert, lively, and never fearful.

Like all Belgian Shepherds, the Laekenois loves work and shows Itself to Its advantage: herding herds, property custody, service. It will watch wonderfully over Its master, Its adoptive family, and the children It will have in Its care.

It’s very playful with them. This temperament goes hand in hand with Its lively,  bold side. It’s always alert, sometimes calm but maybe too rambunctious.

Education of the Malinois

Its intelligence makes It learn easily, but Its assertive character requires, on the part of the teacher, that he shows It the limits not to cross as soon as possible. Indeed, the Laekenois, like all Belgian shepherds, is particularly sensitive.

Its intelligence will push It to obey quite easily. Its education is therefore quite simple. It should be socialized at a very young age so that It does not see the presence of a child as worry and that It can cohabit as best as possible with Its peers.

The Belgian Shepherd Laekenois is cut for work and for life outdoors (except in extremely low or high temperatures). Living in an apartment suits It much less. It can adapt to other environments if It has the opportunity to exercise often and long enough.

The Belgian Shepherd Laekenois is a robust and rustic dog. Its double, well-supplied hair effectively protects it against harsh weather conditions.

As for illnesses, there is not much to fear for the Belgian Shepherd Laekenois, apart from a small risk of hip dysplasia which generally threatens all large dogs.

The life expectancy of a Belgian Shepherd Laekenois is, on average, between 10 years and 12 years.

The Belgian Shepherd Laekenois loses relatively little hair. Its rustic dress is not particularly difficult to maintain, but it does require regular care to preserve its characteristics.

In addition to weekly brushing (or daily during the moult)  using a flexible metal card to ensure the cleanliness of its coat, the Laekenois may need an ear and eyewash with a cotton pad. humidified. This will keep it from infections. 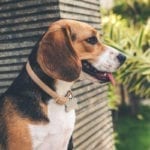 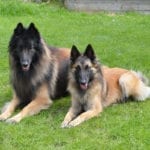