The Belgian Shepherd Tervueren has strong bones and musculature. Of medium-line and harmonious construction, it gives off an impression of power and elegance.

It’s very attached to his master and will not hesitate to protect It as well as to give Its life.

Its education is simple and her maintenance, despite her long dress, is not very difficult either.

It needs physical exercise and cannot be inactive for too long.

The Belgian Shepherd Tervueren owes its name to its village of origin, Tervueren, currently located in the province of Flemish Brabant in Belgium.

It appeared in the 19th century, most likely as a result of a cross between a fawn-colored sheepdog and a black Grœnendael.

The Belgian Shepherd Tervueren was first used for the protection and guarding of herds, before showing off his skills in many other areas: security, research, exhibition, etc.

The Belgian Shepherd Dog breed, including the Tervueren variety, was definitively recognized by the Fédération Cynologique Internationale on January 1, 1956.

The Belgian Shepherd Tervueren is the versatile dog par excellence. It’s gifted at the same time for herding, defense, protection, research, and work in general.

The Belgian Shepherd Tervueren is, moreover, a magnificent show dog thanks to Its superb coat and Its natural elegance. Active, vigilant, extremely intelligent, observant, and loyal, It has all the qualities of the Belgian Shepherd Dog.

At home, It’s an excellent companion for the whole family, very attached to Its master and patient with the children.

It’s also very comfortable in agility events. They are one of the best guard dogs for a house and they can be aggressive with intruders.

The Tervueren is perhaps more in demand of cuddles and cuddles than its fellow Belgian Shepherds. Indeed, he can also be possessive.

Naturally focused on action and work, the Belgian Shepherd Tervueren asks only to learn and to please Its master. The master must educate It in a way that is both firm and gentle while taking care to provide It with early and quality socialization. It doesn’t like brutality at all, because It’s a very sensitive dog.

Its owner will have to show kindness to gain the confidence of a canine who is not difficult to educate.

It just takes a little patience. The extreme intelligence of this dog is a tremendous asset. It will try to please Its master on condition that It understands the exercises and finds an interest in them.

Orders should not be repetitive to not tire It. It can be tempted to test the limits of Its master because It’s sometimes stubborn.

The Belgian Shepherd Tervueren is aimed mainly at active people, able to offer It long outings and a lot of daily exercise. It can only adapt to living in an apartment under these conditions.

It is best to let it roam freely in a large fenced garden. A  house with a garden is the best compromise, even if life in an apartment is fine. The important thing is that it benefits from fairly long or frequent daily outings.

The life expectancy of a Belgian Shepherd Tervueren is, on average, between 10 years and 12 years.

The Belgian Shepherd Tervueren knows 2 moults per year during which It can lose a lot of hair. Outside of these periods, hair loss is not significant. It doesn’t need to be groomed often, but regular brushing is necessary to maintain the beauty and cleanliness of Its coat.

It is recommended to brush the dog with a rake comb during molts and with a card outside of these periods. The Belgian Shepherd Tervueren should not be washed too frequently so as not to alter its protective layer of sebum. The Tervueren must be given special attention to Its ears and eyes to avoid unwanted infections. 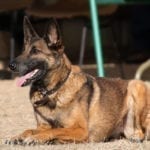 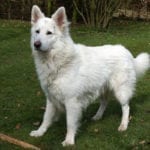