The Bohemian Shepherd is a courageous, friendly, gentle working dog who is devoted to Its master and has confidence in it. This breed has a stable and calm character and is an excellent companion dog for the whole family and especially children.

The deep origins of the Bohemian Shepherd go back to the 14th century, at the time of the Chodové,  people living in the south of Bohemia (historical region currently in the Czech Republic). It was then used for the guard of their territory and their flocks. Until the beginning of the 20th century, this breed practically did not exist outside the country. The Bohemian Shepherd as we know it today comes from a more recent breeding.

It was recognized as a national breed by the Czech Cynological Union on January 14, 1984. The Club of Friends of the Dog of Chod (Klub Pratel Chodského Psa) was created on November 27, 1991. The Book of Origins currently lists more than 2100 dogs belonging to this breed, which has not yet been recognized by the Fédération Cynologique Internationale. A request in this regard was filed in July 2011.

The Bohemian Shepherd is a medium-sized dog that is both robust and elegant. Its compact and well-proportioned body is harmoniously constructed. Too low, regular, and clear rhythm, light, and lengthened strides characterize the natural gait of the Bohemian Shepherd and accentuate its elegance.

The Bohemian Shepherd is an avid hunter, who needs a lot of exercise. They are an ideal dog for someone who is very active. Attentive, docile, dedicated, and intelligent, the Bohemian Shepherd is an easy dog ​​to breed and is very social with children and other pets. Its great agility and excellent flair make It a very good rescue dog, an excellent partner for people with disabilities, and an excellent watchdog.

The Bohemian Shepherd is a courageous, vigilantaw, naturally protective, and very obedient working dog. Wary of strangers, Its very attached to Its master and Its family, especially the children with whom It also asserts Its playful side. Balanced, never aggressive for nothing, the Bohemian Shepherd Dog is an excellent guard and companion dog. But It also excels in many other areas: agility, obedience, rescue, trekking, among others.

Education …
Attentive, docile, devoted, and intelligent, It’s known to be easy to educate. It just requires learning based on firmness and a positive approach. It’s also to be socialized as early as possible, like any other dog.

The Bohemian Shepherd is the ideal dog for the whole family, which It accompanies and protects with all Its affection, and Its instinct as a guardian. In return, It expects attention , gentleness, and availability from Its masters. It will prefer living in a house with a fenced garden to living in an apartment. It adapts perfectly to an urban environment as long as it can sufficiently exert itself.

The Bohemian Shepherd is a rustic, healthy, and resistant dog. Its double and dense coat effectively protects it against cold, humidity, and heat. There is no particular problem with the female when giving birth. On the other hand, it is one of the breeds likely to present with hip dysplasia . Radiographs of the sire’s hips have been required by the breed club since 1997.

The Bohemian Shepherd remains subject to 2 moults per year , with significant hair loss during the second. The rest of the year, the losses are much less marked. Regular maintenance removes dead hair and keeps the dog clean while maintaining the protective capabilities of its coat.

It is a naturally active and hard-working dog. It needs to be constantly stimulated, both physically and psychically. Besides long daily walks, It needs a lot of exercise. It will always be enthusiastic when performing them.

It is recommended to brush the dog twice a week outside the moulting periods and every day during the moult. After each outing in the countryside, in the forest or any environment it’s likely to leave debris, a systematic inspection of the coat, legs and ears must be carried out. 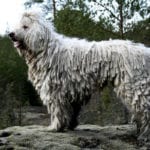 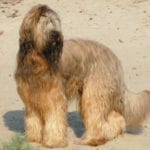