The Chow Chow is a dog that looks like a small bear that is increasingly popular in Many Countries. Yet under all this hair can hide a dog difficult to manage, especially if Its education is not suitable.

The Chow-Chow is a calm breed of dog but can be temperamental with its peers, especially if it’s not socialized enough. In addition, its education must be balanced and adapted on a case-by-case basis and the recall must be worked on very young to ensure the success of this essential indication.

The Chow-Chow originated in China where it was used for guarding and hunting. This breed of dog is very old because it has been known in China for over 2000 years.

The Chow-Chow arrived in England at the end of the 18th century, but it was in 1920 that this breed of dog began to stand out on display.

It descends from spitz dogs like the Nordics, but also mastiffs.

The Chow-Chow is not a dog for everyone. Its sometimes marked character and Its need for balance in Its education require a balanced education. Very attached to Its masters, It can be very independent, like many Asian races. In addition, Its behavior with Its peers can be difficult, especially if It lacks socialization.

Like all large dogs, the Chow Chow has a fairly powerful bark and has a reputation for being quite barking due to its developed guarding instinct. However, the frequency of barking depends on the dog.

Your Chow-Chow will have to be accustomed from its 8 weeks to live in the presence of other animals, otherwise, its predatory instinct can make cohabitation complicated.

The education of the Chow-Chow must be balanced, it must not be lax or brutal. A happy medium, depending on the character of your dog, must therefore be found.

Sometimes difficult to master for recall indications, Its education must therefore limit Its predatory instincts. In addition, it will be necessary to be a consistent master and to strengthen positive and regular contact with other dogs.

The Chow-chow is a dog that will require significant physical and mental activity because it remains originally a utility dog.

It can live in an apartment as long as it is walked around enough every day. In addition, it is a dog that will need good socialization in order to avoid aggressive behavior. So, even if you have a garden, it will be absolutely essential to take it out in order to offer it meetings with other dogs and in different environments.

Chow Chows are more prone to heatstroke due to their thick coat. They are absolutely not suitable for hot climates and absolutely must have a cool place, ideally air-conditioned, in the middle of summer.

The Chow-chow, like all purebred dogs, is predisposed to a number of hereditary diseases (known or suspected) including:

The life expectancy of a Chow Chow is, on average, between 9 years and 12 years

During its molts, the Chow-Chow needs to be brushed very regularly. This is a necessary task regardless of the length of the coat, but it is of course more demanding for individuals with long hairs. This is the only solution to avoid the formation of knots.

The Chow-Chow can be washed regularly, but it must be thoroughly rinsed and dried with a hairdryer after each wash. In addition to regular brushing, which is more intense for the long-haired variety, the Chow Chow must have its eyes cleaned carefully and meticulously.

Indeed, this breed of dog tends to tear quite often. Additionally, Its hair should also be combed through as It tends to develop eczema.

Due to some gastric issues that It can develop, it’s important to give the Chow Chow 2 to 3 meals per day rather than just one. Its diet must be composed mainly of meat, which can be given in its simplest aspect or through suitable and high-quality croquettes. Its diet can therefore be based on industrial or human food. 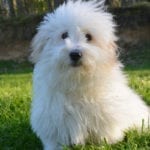