The Icelandic Sheepdog is a Nordic Spitz-type dog, with erect ears and a curled tail. Smaller than average size, its silhouette is writable in a rectangle. Its appearance and its port give off an impression of assurance, liveliness, gentleness, and intelligence.

The  Icelandic Sheepdog is apparent in Iceland with the landing of the first Viking explorers on the island from the 9th century. Over the generations, It has developed a formidable resistance to the harsh climate and living conditions among the shepherds. Its ability to lead and herd large herds over such vast and difficult terrain made It extremely popular.

Apart from Iceland and the Scandinavian countries in general, the Icelandic Shepherd Dog remains quite rare. It’s enjoying increasing success as a family dog ​​due to Its gentle and cheerful character. The Icelandic Shepherd breed was definitively recognized by the Fédération Cynologique Internationale (FCI) on February 17, 1972.

Its hair: double, thick. The outer coat can be mid-length or long. It is rough, while the undercoat is softer and very dense.
Its color: predominantly fawn (cream to reddish-brown), chocolate, gray or black, always accompanied by irregular white markings on part of the face, collar, chest, and tip of the tail. Black mask in fawn or gray dogs.
Its head: triangular in shape, strong bone structure. The skull, slightly domed, is a little longer than the muzzle. The stop is well defined without being overly accused. The nose is black or brown, the muzzle well developed, the lips black and well joined, the cheeks flat, the jaws articulated in scissors.
Its ears:of medium size, well erect, triangular in shape, with a rounded top, extremely mobile and expressive.
Its eyes: almond-shaped, dark brown in color (lighter in dogs with brown or cream coats), medium size.
Its body: fits into a rectangle, robust. The back is straight, muscular and strong, the loins broad and muscular, the croup rather short and broad, the chest well let down, the ribs well sprung, the belly slightly raised.
Its tail: high set, curled, and touching the back.

The Icelandic Shepherd is a dog full of Joy, very playful, curious, and friendly, even with visitors. Never fearful or aggressive, It’s not a hunter at heart. On the other hand, the Icelandic Shepherd Dog is naturally gifted at leading herds. Its liveliness, intelligence, and well-marked bark help It enormously in this task.

Active and hard-working, the Icelandic Shepherd is attentive to the instructions of Its master, whom It always seeks to please. For Its education, It will rely a lot on this desire to learn and activate, with gentleness and a minimum of firmness to establish the limits not to be exceeded.

The  Icelandic Shepherd is not really made to live in an apartment. Barker and greedy for space, It’s much happier in the countryside. It can adapt to urban life if it has a fenced garden and if it enjoys frequent outings. A great sportsman, It loves to accompany Its master on walks or jogging.

Rustic and doubtful with a very dense double coat, the  Icelandic Shepherd dog is remarkably resistant to low temperatures and bad weather. It is characterized by fairly solid health and the absence of predisposition to any disease

The life expectancy of an Icelandic Shepherd Dog is, on average, between 11 years and 13 years.

The  Icelandic Shepherd Dog experiences 2 moults per year during which hair loss is of varying intensity. Some dogs lose a lot more than others. Regular maintenance helps preserve its appearance and condition.

The brushing of the Icelandic Sheepdog is performed once a week. It must be  long and meticulous. During the moulting periods, it is recommended to brush it much more often: at least 3 times a week. 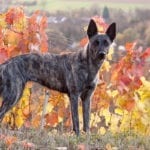