The Irish Soft Coated Wheaten Terrier is a dog breed with a very long name, It’s an Irish breed, with truly fascinating characteristics.

This beautiful dog, elegant, well-proportioned, and very intelligent, is an ideal breed for the company of the whole family and also lives well in an apartment.

An agile, graceful dog, It’s ideal for hunting but is also a perfect animal to live in an apartment with its family, to whom it’s extremely dedicated.

Let’s find out more about its origins, appearance, and character of the Irish Soft Coated Wheaten Terrier.

Although there is no precise record of the development of the breed, this terrier is known to originate from rural Ireland. It performed the same functions as other terriers, hunting burrowing animals, but it was also used as a sheepdog and retriever. Perhaps this is why It’s not as aggressive as the other dogs in the terrier group, and it is easier to socialize.

Although this is an ancient breed, it remained without official recognition for many years until it was officially recognized in Ireland in the 1930s. It appears to be closely related to the Kerry Blue Terrier.

Today, the Irish Soft Coated Wheaten Terrier is a companion and show dog, although not as popular as other dogs.

The Irish Soft Coated Wheaten Terrier, or simply wheat as some like to call it, is a medium-sized dog with a square body. The height at the withers for males is between 18 and 19 inches, while females are slightly smaller.

The ideal weight for males is between 40 and 45 pounds, with females being a little lighter. Although not a strong dog, they are strong and very agile.

The head of the soft-haired wheaten terrier is long and well proportioned to the body. The muzzle is no longer than the skull and ends with a large black nose. Dark-colored eyes, or dark hazelnut, are neither very large nor bulging. The ears are small or medium.

Unlike other terrier breeds, the tail of the Irish Soft Coated Wheat Terrier is not very thick. The FCI standard accepts the full tail, but also the tail amputated to two-thirds of its original length. Fortunately, many countries prohibit “cosmetic” amputations, and this custom is used less and less.

The coat is perhaps the most striking feature of the Irish Mild Wheat Terrier and the one that gives the breed its name. Indeed, this adult dog has a coat with a single layer, a soft and silky texture, and a wheat color that can vary from a light fawn to a reddish-golden hue.

Puppies, however, can be other colors (usually dark), until they reach maturity between 18 months and two and a half years old.

Irish Soft Coated Wheat Terriers tend to be more sociable and less aggressive than most other terriers. For this reason, they tend to adapt better to city life. However, one should not forget that they are still terrier dogs and that, in addition to their great energy, they must be well socialized as puppies.

Wheat terriers can get along with other dogs, but care must always be taken to avoid fights between dogs of the same sex. With other pets, the situation can be more complicated as these dogs may have a tendency to chase other animals, even when the urge for prey is not as intense as in other burrows.

With people, however, they tend to be friendlier and get along with children who are not overwhelming. Socialization of the dog in this case is easier. In fact, although Irish Soft Coated Wheat Terriers may bark to sound the alarm, they are generally not good protection dogs as they tend to be friendly (or at least not aggressive) with people.

Coat care is easy for companion dogs, but it takes time. You should comb the dog at least four times a week, once a day would be even better to prevent its hair from tangling.

Combing is preferable to brushing due to the length of the hair. In addition, it’s advisable to bring the Irish Soft Coated Wheat Terrier to the dog groomer three or four times a year. Haircare for show dogs is more complex and it is advisable to consult an expert.

Despite the time taken to take care of the coat of these dogs, a big advantage is that they shed very little hair. Therefore, they are considered hypoallergenic dogs, suitable for people with asthma or allergies.

The Irish Soft Coated Wheat Terrier may not require as much exercise as other terriers, but it still requires a lot of physical activity and a lot of company.

Daily walks are necessary to keep this dog in good condition. In addition, it is good to give It a good time to play and, if possible, practice a dog sport that allows It to burn energy.

The Irish Soft Coated Wheaten Terrier is very intelligent and tends to please Its family, so Its upbringing is relatively easy and It learns very quickly. It’s also very curious and always attentive to everything that is happening around It.

Although not aggressive, the Irish Soft Coated Wheaten Terrier can show a very strong protective instinct towards Its own and can become a possessive dog.

These dogs respond well to canine training based on positive reinforcement, and styles such as clicker training can achieve great results.

Like most breeds of dogs, wheat terriers tend to suffer from certain hereditary diseases. Among these diseases are:

Kidney and enteric (intestinal) diseases that cause loss of protein in the urine and are often fatal are of particular concern in this breed.

But these are genetic diseases that are easy to diagnose and usually have progressive symptoms, so proper nutrition and prompt treatment will be of great help.

The life expectancy of this dog is 13 or 14 years.

5 facts about the Wheaten Terrier

One of the most loved Terrier breeds is the Irish Soft Coated Wheaten Terrier, a dog that has become increasingly popular in North America. Although many families choose it for its size and its sweet appearance, there are many more things to know about the Wheaten Terrier.

From its psychology to its character, this dog differs from other Terriers for many reasons. Here are five interesting facts to find out about the Wheaten Terrier.

1.They are exceptionally friendly

Wheaten Terriers are very friendly dogs, they love families and relate well to everyone, even children. But beware: they are as friendly as they can become terrible, ruthless watchdogs.

In fact, the Wheaten Terrier does not look kindly on the arrival of a stranger in the house, and is an excellent guard dog. These dogs with their master have a particular habit, that of jumping on the owner as soon as they enter the door: a way of doing that has become a motto, ‘greeting of the Wheaten’.

2.They have a very unique coat

Wheaten Terriers have only one coat, and not a double coat like most dogs and for this reason, they can be perfect for people who have allergies. However, the Wheaten Terrier’s coat also requires some maintenance and cleaning.

3.They are multitasking dogs

The Wheaten Terrier is a dog that adapts to do a little bit of everything, thanks to its brilliant intelligence. Since the beginning of its history, in Ireland, this dog has been bred to help farmers.

Unlike other breeds, however, the Wheaten Terrier adapted to every request that was made, from controlling the barns to even hunting. Despite their small size, these dogs were very useful to Irish farmers in their work.

4.They are famous dogs

They have been painted. Frederic William Burton was one of the painters who decided to immortalize a Wheaten Terrier in an 1841 painting. But he wasn’t the only one, and for this reason, these dogs have become much more popular around the world.

5.They are known as the “dog of the poor”

Today, the Wheaten Terrier might seem like a dog like many others, but at the beginning of its history, in Ireland, not everyone could own these dogs. Hunting dogs could only be owned for a fee and this prompted people to abandon them because they were too expensive.

The Wheaten Terrier was a dog used by the lower class, as we have seen, on farms, for the work of farmers.

In conclusion, the Irish Soft Coated Wheaten Terrier is a dog known for its very energetic temperament and its interesting history. This dog has always been a great help to the farmers and to the sheep guard.

These dogs thanks to their temperament and character have become more and more famous and today the Wheaten Terrier is one of the most popular breeds in the world. If you have one too, you may feel lucky to have such a faithful, loving, and dedicated companion to you. 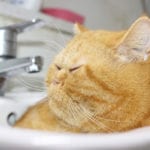