The Staffordshire Bull Terrier, this little staff, energetic, dynamic, and as determined as possible, is an increasingly fashionable breed of dog. Its character and size are attracting more and more people. On the other hand, if you want to adopt a Staffie, you should know that it will need to be spent and socialized enough in order to avoid any behavioral problems afterward.

In addition, Its instinct of burrowing can encourage It to dig big holes in your garden! Its education should also be balanced and maintained throughout Its life.

The  Staffordshire Bull Terrier descends from a cross between the  Old English Bulldog and terriers such as the  White Terrier or the  Manchester Terrier. It’s obviously of British origin and appeared in the heart of the 19th  century.

Previously, it was mainly used in fights against bulls, bears, and donkeys. These fights were banned in 1835 although they have continued throughout the first half of the 19th century.

Its current name was not adopted until 1935 by the  British Kennel Club. Since then, the  Staffie has entered homes. Its dedication, Its affection for Its master, Its playful side, but also Its aptitudes for hunting make It a very popular dog.

The Staffordshire Bull Terrier is tenacious, courageous, intelligent and affectionate at the same time. As long as It has been properly educated and Its aggressiveness has not been stimulated, It will be tender with all members of the family, especially children.

The Staffordshire Bull Terrier is an attentive and reliable companion and guard dog.

The Staffie can live with children, provided that preventive rules are in place, such as never leaving dogs and children without adult supervision. As with all breeds of dog, in order for cohabitation with children to go well, it is necessary to teach children to respect their dog.

Staffordshire bull terriers can live with other animals if they have been used to their presence as a puppy. This habituation should be positive and generally extend over the first year of your dog’s life.

The education of the Staffordshire bull terrier must above all be adapted to its character. You must always be in balance and therefore never be violent or brutal, nor too lax.

Regular contact with other dogs should be put in place in order to avoid de-socializing behaviors that could cause your Staffie to become aggressive with Its fellows. Finally, Its physical and mental spending needs must absolutely be met otherwise his education will be very difficult to implement.

Little by little, the Staffordshire Bull Terrier has become a good companion dog that has adapted to house life. The apartment living is also suitable for it as long as It can walk, run, and jump to channel Its energy.

The Staffordshire Bull Terrier is a particularly robust dog that we must protect from the cold and bad weather because of Its rather sparse coat. It also presents predispositions to certain dermatological pathologies such as demodectic mange (also called follicular mange; due to infestation of the hair follicles by a microscopic vermiform mite) and pyoderma (caused by bacteria of the streptococcus or staphylococcus type).

a few hereditary diseases – known or suspected – are likely to affect dogs of this breed including:

The life expectancy of a Staffordshire Bull Terrier is, on average, between 12 years and 14 years.

The coat of the Staffordshire Bull Terrier is composed of short and smooth hair, its maintenance does not involve any particular difficulty.

It is recommended that you brush the Staffordshire Bull Terrier on a regular basis, about once a week. Its hair and skin must be kept clean in order to prevent any skin pathologies that can affect It through various mites and bacteria. The dog’s eyes should be cleaned using a suitable lotion or physiological serum.

The Staffordshire Bull Terrier requires a diet rich in calcium and protein. It must be adapted to its high energy needs. Thus, it will consist of croquettes available in specialized stores. A very particular effort on its diet should be made during its growth so that it can develop without causing damage to its joints. 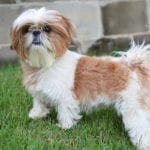